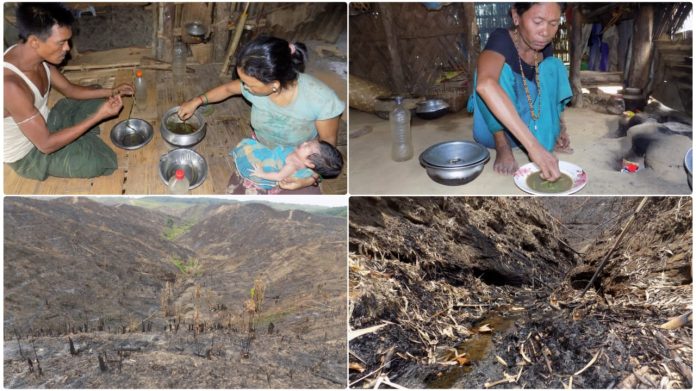 Hill Voice, 5 May 2022, Bandarban: ‘All our means have been burnt to ashes by the company’s fire. The Jum plantations on which our existence depended, they burned to ashes in an instant. For the last few days, I have been living by eating jungle herbs. ‘

Tumrao Mro was saying the words in a very painful voice, holding an eleven-day-old child in her arms.

Not only Tumrao, but about 40 families in the remote Langkom Mro Para, Joychandra Tripura Para and Rengyoung Mro Para of Lama Upazila of Bandarban are in dire need of food and drinking water due to the fire set on by Lama Rubber Industries Limited.

A visit to the fire-hit area on Tuesday afternoon revealed that most of the residents had no food in their houses. They are living a dehumanized life by eating the boiled herbs of the forest. Sometimes they had to go without food.

“There is no rice in the house,” said Hakmati Tripura, a 55-year-old woman from Langkom Mro Para. I am trying to survive by eating the herbs of the forest. I don’t know how many days I will be able to survive like this. ‘

He said, “Unable to bear the oppression of the company, the two families left the village in 2019 and moved elsewhere.”

‘The water in our neighborhood was almost destroyed by the fire. We used to use this water as drinking water. Residents of the area are in dire need of drinking water as the fountain is damaged’, said Inchong Mro, a resident of the area.

80 year Jyoti Chandra Tripura said, “On April 26, the gang of Lama Rubber Industries Limited set fire to about 100 acres of plantation to occupy our traditional Jum land, but no one has come to help us yet.”

‘We don’t have food in our house. We are living a very inhuman life. So far no one had come to help us. Doesn’t the government listen to our cries’, said Ringrong Mro.

Menrao Mro, another resident of the village, said: In the fire, 4 Jum houses (traditional temporary house for Jum cultivation) of the people of the neighborhood including my house were burnt to ashes.

“The fires have devastated the natural forests and bio-diversity,” he added.