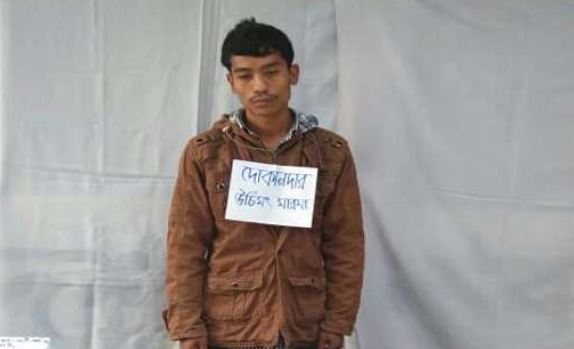 Hill Voice, 11 January 2021, Rangamati: It has been alleged that an innocent Jumma shopkeeper was arrested by the army in Gaindya area of ​​Rajasthaliupazila under Rangamati district and pretended to be a worker of ParbatyaChattagram Jana Samhati Samiti (PCJSS).

The detainee was identified as UsingmongMarma (24), son ofAngsuiprueMarma, a grocery shopkeeper by profession, fromGaindya Para of Gaindya Union. The UsingmongMarma’s shop is next to a bridge a short distance from his house. He was staying there on the night of the incident.

According to local sources, a group of army personnel led by MushfiqurSamit, Commander of Bangalhalia sub-zone of 23E Bengal Regiment of Kaptaiupazila, arrested UsingmongMarma from his shop at around 11:00 pm on January 10, 2021.

At the time, UchingmangMarma and his wife denied the allegations to army. Army then brought UsingmongMarma to the Bangalhalia army camp.

The army later handed over the detained UsingmongMarma to the Rajasthali police station.

A local elder said that the army officers, for their own promotion and self-campaign, sometimes arbitrarily arrested, inhumanelyharassed and even killed innocent Jumma people by plotting to put arm with the arrestee labelling as terrorist.

It is to be noted that it has been alleged that the army in Rajasthali has been conspiring in various ways to incite conflicts among the Jumma peoplewith an aim to suppress them.

It is alleged that the army recently instigated Mog Party members who are sheltered and supported by the army and the local Awami League, to attack on members and supporters of the PCJSS in Rajasthali area.

At a secret meeting on 23 December 2020, Major Manjur, commander of the RajasthaliSadar sub-zone, told the MogParty representatives, “You can’t do anything against the PCJSS.” Major Manjurfurther added, “You show your performing by killing those who support the PCJSS. “We want dead bodies, show us corpses. We don’t know where you will get the dead bodies from.”