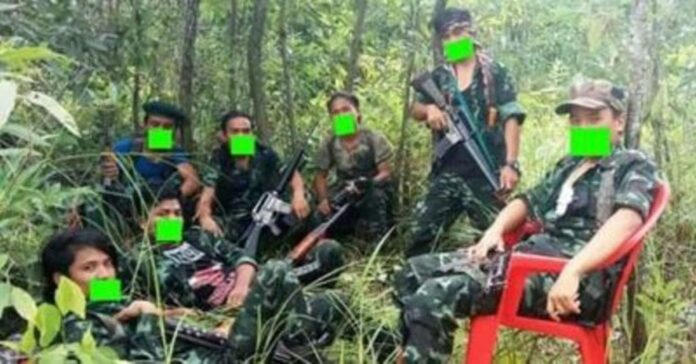 Hill Voice, 10 April 2022, Bandarban: It has been alleged that Marma youths from three villages in Kuhalong Union of Sadar Upazila under Bandarban Hill District are being forced to join in the army and local Awami League-backed terrorist Mog Party. It is learnt that there is anxiety and panic among the youths and parents of the area.

On the night of April 9, 2022, about 25 Marma youths from three villages, who are unwilling to join, fled in fear and took refuge in Bandarban Sadar.

According to local sources, Marma National Party (Mog Party) terrorists have been trying to force young men and women from Chemi Dolu Para, Amtali Para and Bhangamura villages of Kuhalong Union to join the Mog Party for several days. But young men and women have been expressing reluctance to join the Mog Party. At one stage, fearing danger, 25 youths from those three villages fled to Bandarban Sadar around 9:00 last night.

The villages of Chemi Dolu Para, Amtali Para and Bhangamura are located next to the Amtali army camp. According to the villagers, the Mog Party terrorists are roaming the area at the behest of the army and carrying out terrorist activities.

One of the victims, who did not want to be named, said that the terrorists of the Mog Party were forcing them (young men and women) to go to the base of the Mog Party and join their group. She said, “We don’t want to join the Mog Party. So, we fled for our lives. Many more have fled to relatives’ houses in different areas of Bandarban including Chittagong.’

Another fleeing youth said, “Terrorists also threatened to kill us if we disclose the matter of forcible joining to Mog Party. He said the terrorists had already tortured four villagers inhumanly.

An elder villager, speaking on condition of anonymity, said, “These are the work of local Awami League leaders in the present government. young men and women from every village will be forced to join the Mog Party with intention to engage them against the PCJSS.”

The source further said that both the terrorist groups are harassing and oppressing the people of Tankaboti area in various ways. They are extorting large sums of money from many villagers threatening them to entangle in various false cases.