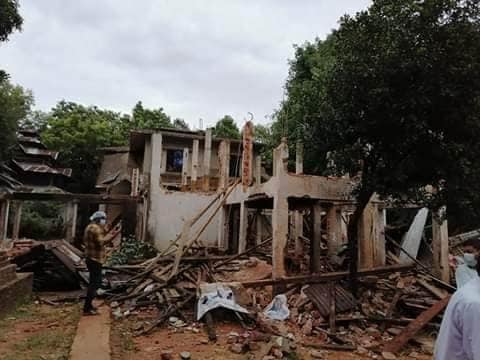 Hill Voice, 19 July 2020, Cox’s Bazar:  Allegations of vandalism have been found in the more than 100-year-old Rakhine Gunameju Buddhist monastery in Rakhine Para of Harbang Union in Chokaria Upazila of Cox’s Bazar district.

According to local sources, a person named Mong Yan had been carrying out one after another fictitious activities regarding the religious Buddhist monastery for a long time in order to achieve personal gain.

On 16 July 2020 Thursday, a Rakhine named Mong Master from a local Rakhine neighborhood and his son Sain Ju along with their hired goons vandalized the temple in the pretext of administration’s order and looted precious gold and Buddhist metal statues in Bihar, Rakhine community members said.

At this time, the 75-year-old monk of Bihar, Sumna Bhikkhu, was dragged out and the hundred-year-old Rakhine Gunameju Buddhist monastery began to be demolished. The elderly monk stayed under the open sky all day and night on Thursday. When the locals tried to prevent them, they chased the locals with sharp weapons.

Rakhine people protested against the vandalism of Bihar and the looting of goods. Upon receiving the news, Upazila Nirbahi Officer (UNO) Syed Shamsul and Officer-in-Charge of Chakaria Police Station (OC) Md. Habibur Rahman visited the spot.

It is learnt that the activities of the Buddhist monastery will continue till the administration gives instructions. Currently, the situation in the area is tense.

Meanwhile, the Rakhine Buddhist Welfare Association has strongly condemned and protested the terrorist attack and vandalism at the 150-year-old Buddhist monastery “Gunameju Buddhist Monastery” in the historic Harbang Rakhine Para. At the same time, it has been demanded to bring the culprits under punishment.