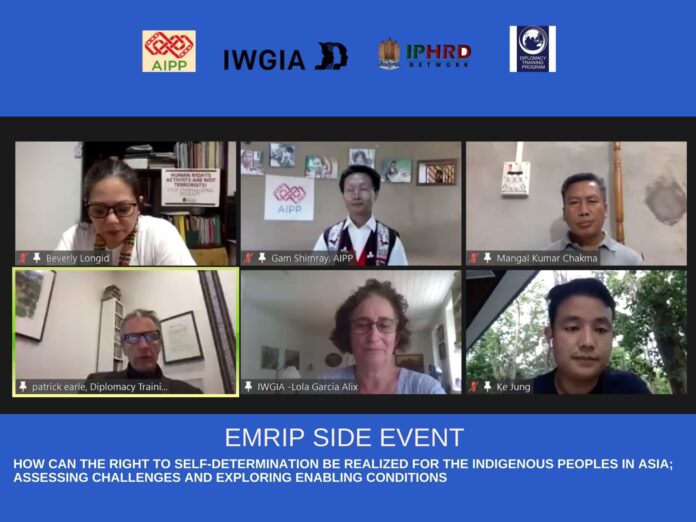 Hill Voice, 16 July 2021, International Desk: Asia Indigenous Peoples Pact (AIPP) side event on the rights to self-determination recommended to the Expert Mechanism on the Rights of Indigenous Peoples (EMRIP) and the Office of the High Commissioner on Human Rights (OHCHR) to undertake a study on the peace accords signed between the states and indigenous peoples and reconciliation initiatives.

AIPP hosted a side event on “How can the right to self-determination be realized for the Indigenous Peoples in Asia; assessing challenges and exploring enabling conditions”. International Work Group for Indigenous Affairs (IWGIA), the Diplomacy Training Program (DTP) and Indigenous People Human Rights Defenders Network (IPHRD) were the co-organizers of this event, organized virtually on 15 July at 10 am Geneva time in the margins of the 14th session of the EMRIP 2021.

Mangal Kumar Chakma, Information and Publicity Secretary of ParbatyaChattgram Jana Samhati Samiti (PCJSS), Bangladesh talked about the Chittagong Hill Tracts (CHT) Accord. Mr. Chakma said despites signing of the CHT Accord in 1997 to resolve the CHT problem through political and peaceful means, but the Government has not come forward to implement the Accord properly and fully as of now.

Mr. Chakma recommended to EMRIP to conduct an assessment study of the CHT Accord to know the progress, identify challenges and gaps in the implementation. He also recommended to the Government of Bangladesh to withdraw all temporary camps including ‘Operation Uttoron’ from the CHT to facilitate the right to self-determination to the local people of the CHT. To execute CHT Regional Council Act and three Hill District Council Acts properly, on transfer of general administration, law and order, police, land and land management, forest and environment etc.

He recommended the EMRIP and the Office of the High Commission on Human Rights undertake a study on the peace accords, including the peace negotiation between the Government of India and the Nagas and other IP in Northeast India to understand the situation and to promote dialogue at the local level and at the United Nations to advance the rights to self-determination and autonomy of Indigenous Peoples in the region.

Ms. Beverly L. Longid, International Solidarity Officer of Katribu (National Alliance of Indigenous Peoples Organizations in the Philippines), Philippines stated- the Philippines’ Indigenous People’s Rights Act (IPRA) of 1997 is said to be one of the most progressive laws of its kind concerning the treatment of indigenous people in the world. It was a direct result of a progressive provision enshrined in 1987 Philippine Constitution, which was created and ratified after the ouster of the dictator Ferdinand Marcos. Under the current Duterte regime, the National Commission on Indigenous Peoples (NCIP)’s the manipulation of FPIC (Free Prior Informed Consent) rights has become worsened. It has not defended and promoted the rights, interests, and welfare of indigenous peoples. Rather, it serves as a primary instrument for further oppression and exploitation of IP.

Ms. Beverly said it is very important for indigenous peoples to participate actively in the broad national coalition to usher in a competent, trustworthy administration in the next national election. This will be a way to present our problems and aspirations in the coming elections and be an active part in choosing a united opposition. It is necessary to intensify, analyze and consciously change the many policies that do not serve the interests of the indigenous peoples and the Filipino people.

Mr. Ke Jung, an Indigenous Peoples human rights defender from Myanmar said about the indigenous people’s movement, their struggle for self-determination and the current situation of Indigenous Peoples, the military Coup started in February 2021.

He also discussed the Union Accords produced through the Union Peace Conference/21st Panglong Conference based on National Ceasefire Agreement (2015). He said the Union peace agreement in Myanmar was not really inclusive and the rights of indigenous peoples were not included there. However, the Current Military Coup situation again pushed back what we achieved in the last five years after the National Ceasefire Agreement. With the current context, we are uncertain about the future now. Military rule is not a solution for the self-determination of indigenous peoples as well as the democratization of Myanmar.

Mr. Leonardo Alvarado, Specialist attorney of the Inter- American Commission on Human Rights Rapporteurship on the Rights of Indigenous Peoples intervened in the event with a special video massage.

The global recommendations from the side event: