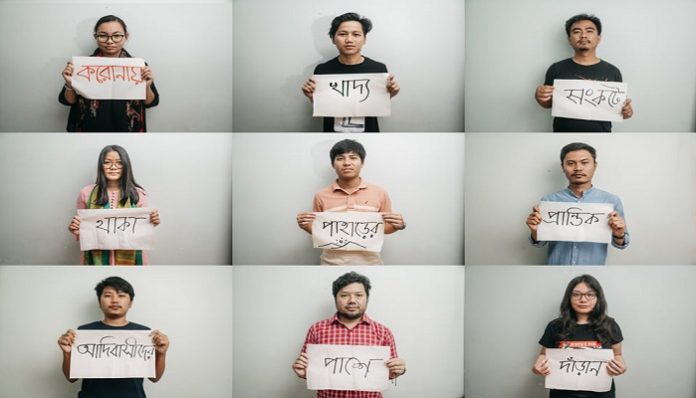 Hill Voice, 2 May 2020, Rangamati:  The first corona patient was identified in Bangladesh on March 8. The number of corona patients is increasing day by day from that day. So far, more than 5000 confirmed cases have been found in different parts of the country. Among the three hill districts (CHT), few corona patients have already identified.

The on-going lockdown to prevent spreading corona pandemic brought another crisis in Chittagong Hill Tracts (CHT). Almost all economic activities are closed amid ongoing lockdown. Most of the local markets are closed due to lock down. As a result, the poor Jum (Shifting) cultivators in the CHT are not able to mobilize to sell their crops in market. The indigenous families depending on day labor have already began to face food-crisis.

The image of Pekru Mro’s family living in Bandarban eating wild potatoes has come-up in the national dailies of Bangladesh. Although various government and non-government organizations have taken initiatives to distribute relief, but they are not reaching the marginalized indigenous areas due to various reasons and even if they do reach, it is inadequate to meet the needs.

A Mro student from Chimbuk in Bandarban, who is studying at Dhaka University, told that the amount of relief provided by government is very inadequate. Moreover, this government support is not sustaining. As a result, we cannot rely on government aid. So, a tension of uncertainty is prevailing in my locality.

Although there are some markets continuing in limited services in CHT, there is no public transport like in other districts. As a result, the indigenous families depending on the occupations related to public transports are also facing crisis. With the exception of a small number of government and non-government employees, most of the peoples in CHT are more depending on small or medium enterprises, agricultural work and shifting cultivation.

Everything is closed now and the means of earning is blocked. As a result, the food-crisis is slowly intensifying. In such a crisis, a group of indigenous youths has taken an initiative to stand by the indigenous peoples of CHT during this pandemic situation. They are raising funds for the helpless indigenous peoples through a Facebook page and event.

One of these youths is Rebang Dewan, who is the Logo designer of United Nations Permanent Forum on Indigenous Issues (UNPFII) and a student of the University of Dhaka. Moreover, he is also serving as the President of Dhaka University branch of Chittagong Hill Tracts Hill Students Council, a student wing of PCJSS. In a conversation, Rebang said that, various humanitarian people have already contributed in this event. At present, we have collected a fund more than one hundred thousand taka for helpless people of CHT, just within three days with the immense love of humanitarian people.

Reng Young Mro, a student of Jahangirnagar University, who is also involved with this fund raising group, said that, the marginalized indigenous peoples deprived of modern technology and communication, are already suffering various problems. We are sure that corona epidemic is creating more sufferings to them. Even before the lock-down for corona pandemic, we are sure that in such a breathtaking reality, food shortages would take a more extreme shape in the remote areas of Sajek and various remote areas, including Thanchi in Bandarban where food shortages often occur every year.

In addition, “I already knew that, many Tanchangya indigenous families in Debachara area under Rowangchari Upazila of Bandarban district are passing their days in food crisis. In these circumstances, as the indigenous youths of this generation we cannot avoid our responsibility by remaining silent. Therefore, we are trying our best to stand by them.

Pallab Chakma, Executive Director of the Kapaeeng Foundation and one of the coordinators in this Fund raising campaign said that, we are collecting information on present state of crisis from remote areas of CHT and through these information, we are identifying the most vulnerable areas. “During the distribution of relief, we will cooperate with the organizations and groups who are working in this field so that we can support the most vulnerable indigenous peoples”, he added.

The organizers also appealed to the humanitarian peoples at home and abroad to extend their gratitude for the underprivileged Indigenous peoples of CHT. They also provided the Bkash accounts through which they are raising fund.