Hill Voice, 15 November 2018, Dhaka:  The Ministry of Chittagong Hill Tracts Affairs (MoCHTA) has issued a circulation titled “Regarding present attitude of security forces and civil administration towards the general Bengali people and regional Bengali parties and probable long-term impact” to the Hill District Councils and Deputy Commissioners of three hill districts. The circulation signed by Riva Chakma, Senior Assistant Secretary of the MoCHTA was issued on November 01, 2018 in reference of an order of Armed Forces Division of Prime Minister’s office dated 06/09/2018.The circulation says,

“With reference to the subject and in context of the source memorandum mentioned as in the above, it is hereby informed that the Intelligence Department of Armed Forces of Prime Minister’s Office has sent the following recommendations on present attitude of the security forces and civil administration towards the general Bengali population and regional Bengali parties and probable long-term impact, for execution-

a) Necessary directives be issued specifying sympathetic and humanitarian treatment on part of the security forces and administration towards the Bengali people and not to inflict harassment upon them.

b) Necessary measures be undertaken to ensure observation of various programs by the Bengali organizations and legal rights of the Bengali people.

c) Necessary measures be undertaken for full-form of administrative and legal support to recover illegally occupied lands of the Bengali people including the Sonamian Tilla.

d) In order to prevent the possible shifting the Bengali people from CHT to the plain lands, alongside formulation of effective planning to regain confidence in them, the NGOs, local administration and security forces be issued directives to play effective role in education and economic development of the Bengali people.

e) Under this circumstance, in accordance with the order, you are requested to take the next necessary measures on the recommendations mentioned herein above.”

Sajib Chakma, Assistant Information and Publicity Secretary of the PCJSS, condemned against issuing such controversial and anti-Accord circulation. It is direct violation of the CHT Accord, he added. He demanded to withdraw this circulation without any delay. 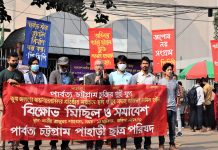 What’s going on in the hills is desolate military rule: speakers at the PCP rally 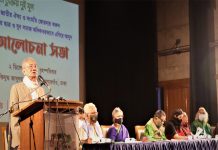