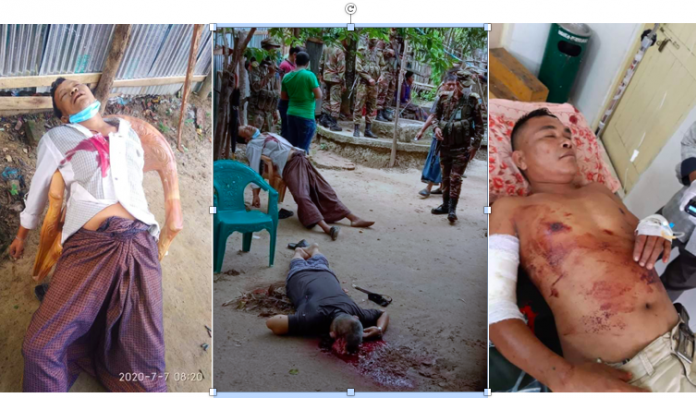 Hill Voice, 7 July 2020, Bandarban:  It has been reported that 6 Reformist armed members have been killed in a gunfight at Balaghata in Bandarban Sadar Upazila. In addition, three more Reformists have reportedly been injured seriously.

According to local sources, the incident took place on 7 July 2020 Tuesday at 7:00 am at the house of Ratan Tanchanga in Baghmara Bazar of Rajvila Union under Bandarban Sadar Upazila.

The six deceased have been identified as Ratan Tanchangya, President of the Bandarban district committee of the Jana Samhati Samiti (MN Larma) faction widely known as Reformist group, Bimal Kanti Chakma Prajit alias Bidhu, military chief of Bandarban district of Reformists, David Marma, Joy Tripura, Dipen Tripura and Pragati Chakma Milon. Besides, Niru Chakma and Bidyut Tripura were among the three injured. A woman was also reportedly injured. However, her name was not known.

The Reformists have blamed Parbatya Chattagram Jana Samhati Samiti (PCJSS) for this incident. However, a responsible person of PCJSS denied the involvement in the incident. He mentioned that the PCJSS was being involved in the incident conspiratorially for political purposes.

On the other hand, many locals suspected that the incident may have been due to a misunderstanding among the Reformists.

According to local sources, a small group of Reformists guards with weapons at various places near the Baghmara Bazaar every night, and in the morning they would gather at the house of Ratan Tanchanga and stay with the main group all day.

Many locals, who did not want to be named, said that the incident took place when the security group of Reformists exchanged fire with main group presuming each other as opponents when they came to join the main group in the morning.

Most recently, on 8 May 2020, another Reformist group was escorted by an army from Khagrachhari to Baghmara in Rajvila Union of Bandarban Sadar Upazila. After arriving in Baghmara, the Reformists stationed at Ratan Tanchanga’s house in Baghmara Bazar, 500 meters away from the Baghmara army camp.

Soon after their arrival at Baghmara, the Reformist armed terrorists started extorting, beating, threatening and harassing the people. In the shelter of the security and law-enforcement forces, Reformist group started collecting extortion by opening collection posts at the neck of administration. After stationing at Baghmara, they beaten up at least 6 people and harassed and threaten many people calling them to their base and forced them to pay money at gunpoint.

According to local sources, the people of the area have been threatened by the Reformists that no one will be able to work for the PCJSS. Either they have to work with the Reformist party, or they have to join the ruling Awami League. Otherwise, they will have to face extreme consequences, they threatened.

On 2 July 2020, a group splitting from the Reformist group based in Baghmara Bazar went to Reisa area of ​​Bandarban Sadar Union along with the convoy of Chairman of Bandarban Hill District Council Kyaw Shwe Hla. At that time, Kyaw Shwe Hla was returning to Bandarban town from Rowangchhari upazila. In Reisa, the Reformists tried to open a collection post near the Reisa army camp.

It may be mentioned that an armed group of Reformists was brought from Dighinala to Subalong Bazar of Barkal Upazila by security escort of Dighinala army zone on 14 May 2019 to continue killing, abduction, extortion etc. with the Reformists in order to obstruct the movement for implementation of the CHT Accord.

On the other hand, in last April Reformists and UPDF (Democratic) members took up position at a settler’s house adjacent to an army camp at Babuchara in Dighinala in Khagrachhari district. Similarly, most recently, on 31 May 2020, the army escorted a group of Reformist armed members from Subalong Bazar to Jibtali Union in Rangamati sadar upazila.

Thus, under the shelter of the army, the Reformists and the UPDF (Democratic) members have been carrying out armed activities in Subalong, Babuchhara, Jibtali and Baghmara, extorting money, kidnapping, collecting ransom, beating and killing people as per target of army.

There are allegations that the money extorted by the Reformist and UPDF (Democratic) groups have been shared from the local army camps to the GOC of 24th Infantry Division in Chittagong. According to confidential sources, a lion’s share of the extortion money reaches the GOC every month.