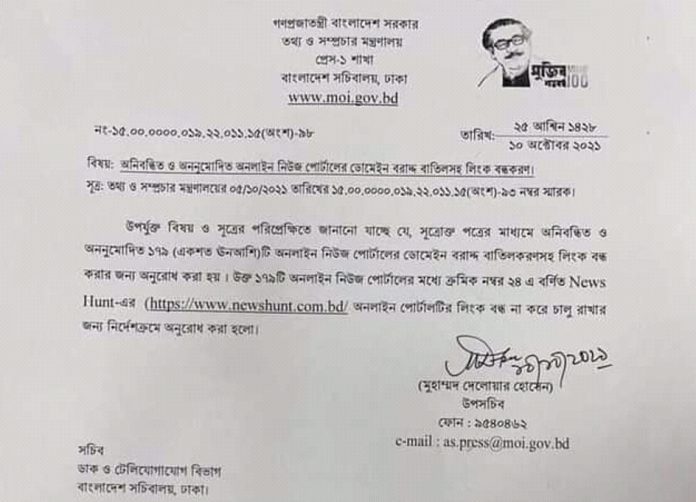 An information letter signed by Muhammad Delwar Hossain, Deputy Secretary, Ministry of Information and Publicity, on October 10, 2021 and a press release signed by the same person on October 11, 2021 informed about the decision of the government.

Although the Hill Voice is an online news page on the Chittagong Hill Tracts, Indigenous Rights, Minority and Women’s Issues, and Human Rights, but it is published from Ontario, Canada. From the very beginning, this Bengali and English bilingual news page has been publishing and disseminating various news, reports and articles on indigenous rights, women and minority communities and human rights in the Chittagong Hill Tracts and the plains of Bangladesh with objectivity and boldness. As a result, the Hill Voice soon attracted the attention of various human rights activists and conscious readers including people from indigenous and minority communities in Bangladesh and abroad including the Chittagong Hill Tracts.

The news was the Hill Voice’s own news and English translation of its own Bengali news. The Hill Voice was able to successfully refute the allegations by presenting appropriate explanations and arguments and submitting factual evidence.

In fact, the address and phone number of the complainant (Taufiqul Pius) were also proved to be completely fake and baseless.