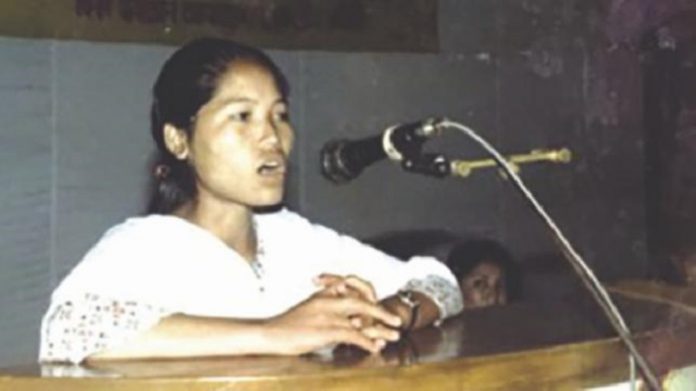 Hill Voice, 12 June 2020, Rangamati: Today marks the 24th anniversary of the abduction of Kalpana Chakma. Even in 24 years, the state of Bangladesh could not able to trace Kalpana Chakma. The government could not bring anyone involved with this heinous incident to justice and to give exemplary punishment to them.

This is an utter failure of the Awami League government led by Bangabandhu’s daughter Sheikh Hasina in establishing proper justice for the misdeeds of the army in the Chittagong Hill Tracts (CHT) and in ensuring equitable justice in the country.

It is to be mentioned that Kalpana Chakma, the then Central Organizing Secretary of Hill Women’s Federation (HWF), was forcibly kidnapped from her house of New Lallyaghona village under Baghaichari Upazila of Rangamati Hill District at the gun-point at the wee hours on 12 June 1996, by a troop of military and law-enforcement force and Village Defence Party (VDP) personnel led by Lieutenant Ferdous, then commander of Kojoichari army camp nearby.

During road-blockade program in protest of Kalpana Chakma kidnapping jointly organized by HWF and Pahari Chatra Parishad (Hill Students’ Council) on 27 June 1996, Rupom Chakma was shot to death while Sukesh Chakma, Manotosh Chakma and Samar Bijoy Chakma were brutally killed with sharp weapons in an organized communal attack of local VDPs and Muslim settlers in Babupara and Muslim Block areas of Baghaichari upazila with the direct support of Baghaichari army camp authority.

In the face of wide-scale condemnation and protest at home and in abroad, the government though formed a 3-member Investigation Committee headed by Retired Justice Abdul Jalil, yet the government has not made the report public even after 24 years.

An allegation filed with the local Baghaichari Police Station by Kalindi Kumar Chakma, the elder brother of Kalpana Chakma immediately after the kidnapping incident following which though the Final Investigation Report of Police was submitted on 21 May 2010 after 14 years, the report mysteriously avoided names of the real alleged persons and offenders. Consequently, the complainant Kalindi Kumar Chakma submitted a Disagreement Appeal to the court against the said Final Report.

At the last, Kalindi Kumar Chakma, complainant of Kalpana Chakma abduction case, submitted his Disagreement Appeal to the court rejecting the ‘Final Investigation Report with recommendation for stopping the investigation process’ submitted by the 39th Investigation Officer and demanded to ensure proper justice after having undergone through a high-level probe.

Since then and onward, the police repeatedly began to seek time mentioning inability in submitting the report on their part.

This is the bright illustration of justicelessness to the Jumma people of CHT on part of the state in this land. This is the best instance of negligence and deprivation of the state towards the women society at large. It is an irony to the much-claimed-about ‘zero-tolerance policy’ of the present government against violence upon women and children.

It is a partial portrait of discrimination and indifference of the state authority towards the vulnerable and marginalized population living in the country. This is the burning instance of brazen impunity to the alleged perpetrators offered by the state authority. This provides a direct witness finger-pointing that the Jumma-inhabited CHT is under extreme squeezing roller of the army.

This proves that the savagery like horrendous violence against Jumma women including abduction, rape and killing after rape is being used as the heinous weapon in forcible occupation of lands, ethnic cleansing of the Jumma people, and above all, turning the Jumma predominated CHT into a Muslim-dominating region.

Furthermore, it is not only the kidnapping incident of Kalpana Chakma, even after signing the CHT Accord in 1997 aiming at resolving the CHT crisis through political and peaceful means and establishing just rights of the CHT permanent residents including the Jumma people, it is due to the reason of not having the Accord properly and fully implemented and especially, many indigenous women have fallen prey to sexual abuse and hatred violence by the Muslim Bengali settlers and personnel of security forces.