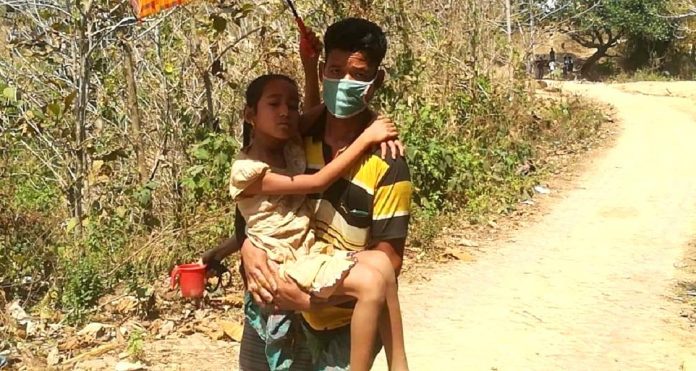 Hill Voice, 9 April 2020, Khagrachari:  18 more including 15 children from Rotichandra Karbari Para, an indigenous Tripura-dominated village of Merung Union under Dighinala Upazila of Khagrachari Hill District, has been reported sick. They were admitted to the Dighinala Upazila Health Complex in critical condition on 8 April 2020.

According to the Kapeeing Foundation, it has been 90 children of Baghaichari Sajek in Rangamati district; Lama, Ruma, Thanchi and Bandarban Sadar upazilas in Bandarban district and Dighinala and Panchari upazila in Khagrachari district infected with measles since late February. And the number of people infected with measles rises to about 659 in the 37 villages of the said 7 upazilas, of which 456 are children. A total of 10 children have died so far.

Local sources said that for the past few days, 18 persons of Rotichandra Karbari Para of Merung Union had been suffering from the ailments. It is reported that the physical condition of the children was very weak. They suffer from extreme malnutrition.

Doctors, meanwhile, have acknowledged the symptoms of the disease as ‘measles’, but could not say for sure. Rather, it is sometimes referred to as ‘unknown disease’. As a result, anxiety and panic among the people has also increased.

Upazila Health and Family Planning Officer Tanoy Talukder said, “The 15 children, who were diagnosed with an unknown disease, was admitted to the health complex on Wednesday. Initially, the physical condition appears to be infected with measles. However, nothing can be said for sure before examining the sample. A sample of 5 children of the infected children was collected on March 31. However, due to the ongoing lockdown, it could not be sent to Dhaka.”

However, locals experiencing the symptoms of the disease are considered to be measles.

It is to be noted that on 29 March 2020, a child named Dhanika Tripura (9) of Rotichandra Karbari Para died of the same disease and about half a hundred children became ill. After that, on 29 March, 25 more children were admitted to the Upazila Health Complex.

Local authorities have said that the hospital authorities and the administration have tried to hide the fact that the disease is sometimes said as ‘unknown disease’, sometimes ‘prejudice exists among the affected hill people areas and unwillingness to take medical treatment’ etc. In the remote areas of Zuma, the inaccessible public health services, by saying so, that there is an attempt to hide the real picture of not reaching government health care in these remote areas, point out the local public representatives.