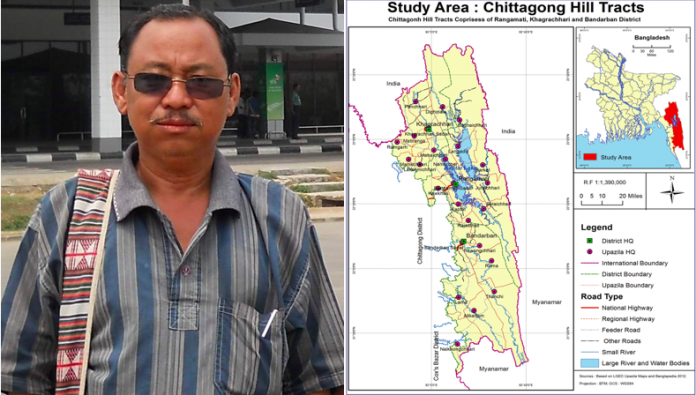 Events during partition in the CHT:

On 3 June 1947, the fixed schedule of India-Pakistan partition i.e. gaining independence of both the countries was declared by Lord Mountbatten through radio and print media. It added that the British, having devolved the power to India and Pakistan, would go back to their own land. It was by then discussion among the Chakma leaders was held to determine the issue as to which side CHT would join between the two countries. The Chakma people of all strata were in unanimous opinion to join India. The reason was that the Hindu culture has the affinity with that of the Chakmas’ to optimum level. The Chakma king, royal family and the Dewan courtship held the same opinion. But the doubt that haunted in them was as to whether the statuesque of the CHT and kingship with powers would be protected as it had been with the British.

With this swaying state of mind, it was decided to send a group of representatives to Delhi soon to meet and hold a face-to-face talk with the Congress leaders. The representation will be headed by Kamini Mohan Dewan, President of Parbattya Chattagram Jana Samiti (Chittagong Hill Tracts Peoples Association), the only political organization in the CHT and Sneha Kumar Chakma, leader of Chakma students’ organization. Besides, on part of Royal family Raja Bhuban Mohan Roy, himself, assisted by Aboni Dewan, member of Jana Samiti, would lead a separate representative group. Both the representative groups separately met with the Congress President Acharya J B Kripalani, Sarder Vallabhbhai Patel and Rajendra Prasad. The Congress leadership assured them that a group of representatives would go to Chittagong to discuss on the CHT affairs towards end of that June. Justice A D Thakkar would lead the Congress representative group. Joy Prakash Narayan, Profulla Ghosh, Joypal Singh, Rajkrishna Bose and Fulban Saha would be among other members. Sneha Kumar Chakma would be the co-opted member of the representing group.

Accordingly, the hearing was held from 16–24 July 1947 at Belvedere Palace in Calcutta. The first day was for the Congress to raise demands during which a region of West Bengal measuring an area of 40,137 square mile was raised for inclusion in India. But the issue of the CHT was not for a single moment raised by the Congress on that day and the onward days. But on part of the Muslim League, a demand was placed to annex the CHT to Pakistan on 19 July 1947. The argument was: ‘though the CHT region had been shown in the map as a non-Muslim area, yet it is nothing but a pocket of Muslim-inhabited zone. Besides, there is no linkage of this non-Muslim area with any other non-Muslim inhabited region. Above all, in the entire East Bengal, it is only the CHT wherein construction of Hydro-electric dam is possible. So, annexation of the CHT to Pakistan is rational. 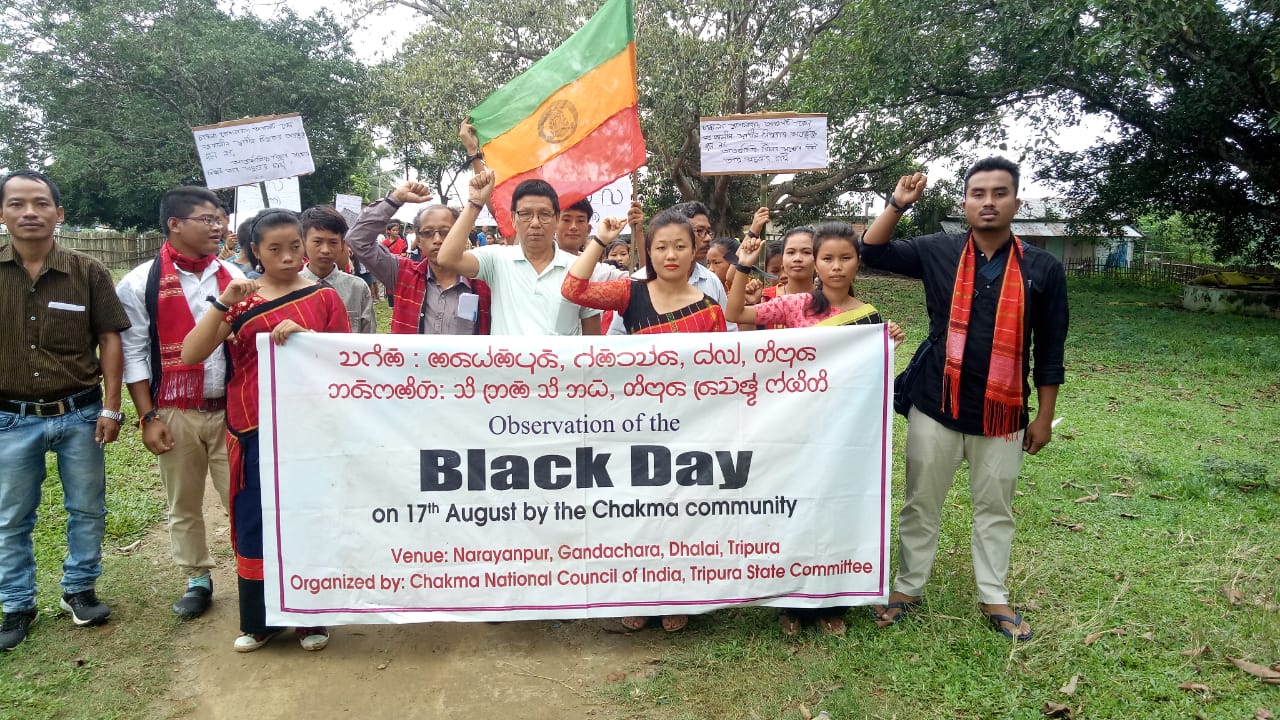 Thus, after having the issue of the CHT’s annexation to India left stranded, on 1 August 1947, while the concise reports of Bengal Boundary Commission and Punjab Boundary Commission were shown to the leaders of National Congress and Muslim League, by then, Sarder Vallabhbhai Patel reportedly became tempered to the extreme point at seeing the CHT’s inclusion in Pakistan. Soon he wrote a letter to Lord Mountbatten expressing his resentment. But, it was too regrettable to say that the next day was the Independence Day to be celebrated by Pakistan. What would there be by expressing resentment at odd hours?

On that day of 13th August, Sir Cyril Radcliffe, Chairman of both the Boundary Commission, in person himself, handed over the reports of Bengal Boundary Commission and Punjab Boundary Commission to Lord Mountbatten. Lord Mountbatten accepted the reports with thanks and kept the enveloped reports into a green-color leather box. He graced both the celebrations of Independence Days of Pakistan and India on 14 and 15 August respectively and in the afternoon of 16th August, he sent those reports to the offices of National Congress of India and Muslim League. The next day, on 17th August, the much-awaited Boundary Commission Reports prepared by Radcliffe were made known to the people of India and Pakistan through radio and print media. But during the previous 3-4 days, bloody riots, looting, arson, rape and kidnapping continued to happen unabatedly across various provinces, districts, and lanes and from one village to another. On the other end, the man lacked of humanitarian conscience, ‘ignorant of India’, and butcher of Boundary-report making, Cyril Radcliffe left for England on that very 14 August.

Now question arises, was it the fact that the Congress and Muslim League leaders had no knowledge of boundary line determination before 13th August? Was the Muslim League really unaware of ceding the Muslim-majority Ferojpur, Gurudaspur and Maldaha to India? Was Congress innocent of non-Muslim inhabited CHT’s annexation to Pakistan? Was it that both the parties were in relax by entrusting all responsibilities upon Lord Mountbatten and Radcliffe? Is it at all believable? Let alone the Hindu-majority Sylhet, which was ceded to Pakistan by means of forgery in the name of plebiscite. But for the case with the CHT, why Congress did not step up measure before too late? Is it not that Pakistan had bagged the CHT by raising a fallacy of having no linkage with India? This CHT had never been attached to Chittagong. Rather it had been an ‘Excluded Area.’ It was owing to this reason, CHT did not have representation in the Council of Bengal.

Hence, the injudicious people say that the CHT was intentionally put to alter of sacrifice. This seems to be apparently true. In this regard, the point is worthy to be mentioned that during partition, the issues of border security and military security of the northeast India and sea-trade had not been given thought with due importance at all. Had it been given a though over, then the advantage would have been easily available. Because, by then the River Teknaf and Cox’s Bazaar both the places were situated within geographical ambit of the CHT and Indian seaport would have been built there. At that the Indian government would not have to run with the process for taking the abandoned Mandalay seaport in lease at high cost. Even India would not have to beg for Chittagong seaport from Bangladesh.

It was true to the fact that Pandit Jawahar Lal Nehru and Sarder Vallabhbhai Patel assured the CHT representatives of CHT’s annexation to India. Hence, during partition, the Chakma leaders were ascertained in assumption that CHT would definitely have annexed to India under India’s supervision. Besides, as per the law of partition, as a non-Muslim dominated area, the region was sure to be ceded to India. Hence, on 15 August 1947, with due permission of the Deputy Commissioner, the Chakmas in Rangamati, the district town of the CHT, hoisted the Indian Tri-color flag with proudness. But it was on 17th August, the unfortunate message came to be known that the region had been annexed to Pakistan. Since then and onward, there began trouble with the   Chakma leaders as the Baluch Regiment of Pakistan pulled down the Tricolor flag and tore it off on 21 August 1947; and this wrathful action was followed by issuance of arrest warrant against the Chama leaders; visiting Delhi by the Chakma leaders; assurance by Vallabhbhai Patel or creation of resistance; promptly getting tempered on part of Nehru on hearing about resistance against Pakistan, etc. events have been dealt in other spaces for many occasions and hence, it requires no more discussion in details.

But what deserves to be mentioned here is the prompt expression of opinion or reaction that came up immediately after the declaration. For instances, Justice Muhammad Munir, a Muslim member of the Punjab Boundary Commission said: “I was quite sure that the CHT would be annexed to India.” The member of Peoples’ Council of India, Joypal Singh, one of the indigenous peoples’ leaders said: “CHT must be brought back to India.” It was Jawaharlal Nehru, himself, while addressing a mass gathering in Calcutta, said that Pakistan will be consulted on affairs of returning CHT back to India. But that discussion has never taken place. And on the other end, it is the Chakma indigenous people who for having been branded as “pro-Indian” have been carrying the ‘defamation’ during over the last 70 years ever since the independence of India and are pulling a distressed life to this day – the end of plight is known to none.

Therefore, there has been left no alternative to the Chakmas and other fellow indigenous people residing in the outer world but to observe the 17th August as Black Day while following the principle of non-violence. We are in belief that it is through this program, if the space of sympathetic discussion gets expanded by the world conscience and attention of the world human rights activists is thereby attracted, then, the CHT indigenous people would be benefitted at least to some extent.