Hill Voice, 26 January 2021, Bandarban: It has been reported that 13 indigenous Mro children of four Mro villages of Kurukpata Union in Alikadam Upazila under Bandarban Hill District have been rescued from the hands of Islamic converter groups.

On January 22, 2021, a group of conscious Mro students, in collaboration with local NGO workers and social workers, rescued the children from an organization called ‘Eidgah Tribal Muslim Welfare Association’ in Cox’s Bazar. 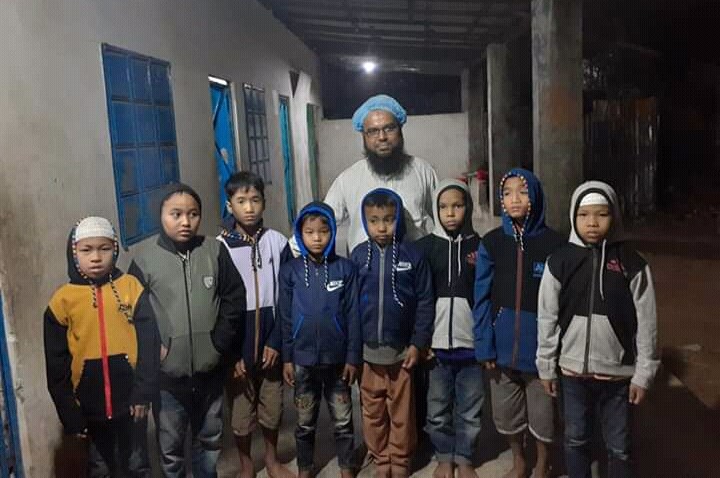 The locals alleged, this group of Islamic converters took these children from poor and simple Mro families by trying to tempt to provide the cost of living, food, education and financial support. Later, they kept these poor children in different madrasas and gave them various teachings of Islam including Azan (prayer). Children are dressed in Islamic clothes. At one stage these children were converted to Islam. Families or their illiterate parents think that their children are being educated in the general education of the country.

According to the victims, a man named Dr. Md. Yusuf Ali, also known as JMB Shamim, is one of the perpetrators of the conversion.

Aungwai Mro Karbari said, ‘We agreed to come to our village and look for children who will be given the opportunity to study.’ But then they took our children to the Eidgah Tribal Muslim Sangha Madrasa in Cox’s Bazar district. After reaching there, it is said, ‘your children will be kept here, they will stay here and study without pay.’

‘Then I see more hill kids there,’ he added. ‘Talking to them, I found out that they have been converted to Islam.’

There are allegations that the conversion of Buddhist, Hindu and Christian indigenous Jummas in the Chittagong Hill Tracts to Islam has intensified in recent times. Conversion is going on in Bandarban district especially by showing the temptation of financial facilities, education, healthcare, house building, cattle and goat rearing, interest free loan etc. In Bandarban district, settlements have also been set up under the names of ‘Tribal Muslim Adarsha Sangha’, ‘Tribal Muslim Welfare Organization’ and ‘Tribal Adarsha Sangha Bangladesh’ and through these organizations work is being done to convert Jumma people to Islam.

Besides, the news of taking young children from their parents in the name of studies and enrolling them in madrasas in different parts of the country including Dhaka and Gazipur and converting them to Islam without the knowledge of their parents has come up in different media at different times.

According to a source, there are more than 10 Jumma Muslim villages in different areas including Bandarban Municipality, Alikadam, Rowangchhari, Lama. These converted tribal Muslims are called ‘neo Muslims’ or ‘tribal Muslims’. Efforts to expand the activities of conversion are being made using these converted Muslim settlements as bases and through some selected neo-Muslims providing them facilities.

According to various sources, Dr. Yusuf Ali, an outsider doctor and Imam of Alikadam Upazila Jame Mosque, Maulana AKM Ayub Khan have been seen as the most active in recent times with the conversion of indigenous Jummas to Islam in Bandarban including Alikadam. They are constantly trying to convert the indigenous people by showing them various temptations and are providing legal and financial assistance including affidavits for the conversion of the poor and uneducated indigenous people.

It may be mentioned that on January 1, 2017, while being trafficked to a madrasa in Dhaka, the police rescued four indigenous children from the ‘Guest Residential Hotel’ in Bandarban. Earlier, on January 2, 2013, police rescued 16 indigenous children from a madrasa called Abujor Jifari Mosque Complex under Dhaka’s Sabujbagh police station. Children are forcibly converted to Islam. Before that in July 2012, 11 indigenous Tripura children were rescued from different madrasas in Gazipur and Dhaka. In January 2010, police rescued 33 Buddhist children from a guest boarding hotel in Bandarban alone. These children were being taken to Dhaka collecting from Thanchi upazila of Bandarban with this promise and temptation that they will be admitted to Dhanmondi Adarsha ​​Medina School.