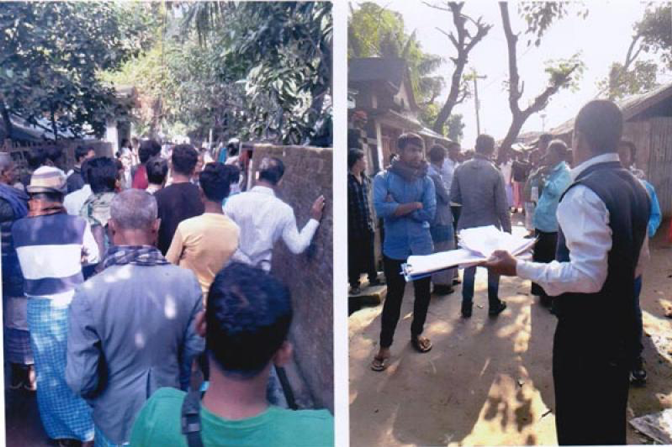 The eviction is rampant in the Rakhine village of Chaufaldandi union as part of the construction of a super dyke to protect the Chittagong-Cox’s Bazar coast. At the same time, 4 Buddhist temples and 3 crematory grounds in the area will be destroyed, said the local indigenous Rakhine people.

The local Rakhine community has given a memorandum to the Deputy Commissioner of Cox’s Bazar district urging them not to harm the people as there is enough land west side of the locality to build embankments or super dykes.

A social worker from Rakhine Para in Chaufaldandi Union Aa Prue Rakhine, local Member of Union Parishad Uchha Ching Rakhine, Kyawsainmrin, Mongkyaching, Thoinwain, Khomong et al, said in a written application to the Deputy Commissioner of Cox’s Bazar on January 13, 2020 that the government has taken plans to build embankments or super dykes to protect the coast.

The Cox’s Bazar Water Development Board has listed more than 100 Rakhine families in Rakhine Para of Chaufaldandi Union.

At the same time there are many Muslim families here. It is heard that these families will be evicted. Thousands of women and children of these families are spending their days in extreme terror.

The Rakhine people have been living here for about 400 years. There are 4 hundred-year-old Buddhist temples, 3 crematory grounds and many antiquities. Which is now on the verge of disappearing.

Our demand is that we want the development of the government but not to make the people to the destitute, the responsible quarters of the government should come to the area and see that there is a lot of land on the west side. There are also many private lands that the government can acquire if it wants.

There is no point in evicting the poor and helpless indigenous Rakhine families and making them destitute. Therefore, we are kindly drawing the attention of all concerned including the Administration Water Development Board.

In this regard, the leaders of the Rakhine Buddhist Welfare Association said that the Rakhine families of Chaufaldandi Union are very worried. They called on all to stand by Rakhine families, including initiating for planned development without evicting people.