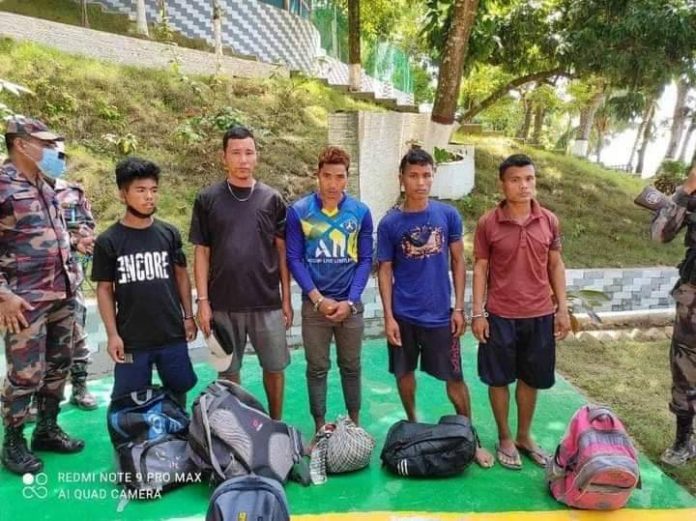 According to local sources, BGB members searched the engine-driven boat at the Karnafuli river check post near Bara Harina BOP camp on Tuesday morning, 5 October 2021. The BGB members recovered 30 rounds of cartridge, 10 empty shells of 0.22 bore and two pairs of Nepalese (DMS) boots. The detainees are-

The first six of the 7 arrested are residents of Halamba area of Ward No. 9 of Barkal Union. Another is said to be a resident of Chaichal Para in Ward No. 6 of Aimachara Union.

The BGB and police conducted a joint operation in Halamba area of Ward 9 of Barkal Union on Wednesday morning on 6 October after arresting the 7 persons. During the operation, the following 3 villagers of the Pangkhoya community were detained from their homes with their licensed SBBL guns. However, BGB claimed to have recovered 8 illegal firearms from them during the operation.

According to local sources, the 7 persons, who were arrested with 30 rounds of cartridges from an engine driven boat, went to Mizoram of India on 17 September 2021 by collecting the dogs from Rangamati and sell them in Mizoram. Three of them bought 10 rounds of cartridges each. Another man named Adi Pangkhoya bought two pairs of boots for use during Christmas event. According to local sources, they also bought 10 empty shells of point 22 bore, one packet of potassium and 3 packets of testing salt.

A villager of the Pangkhoya community, who did not want to be named, said that all the arrestees of Pangkhoya community are traditional Jum farmers and planters. They usually buy government-licensed SBBL guns to protect Jum crops and plantations from wild animals and birds. They also use their own-made guns, subject to permission from local camps, which is an open secret, he said.

He added that with the exception of three licensed SBBL guns, the remaining five home-made guns could not be used for terrorist activities except for protection of crops from wild animals and birds. He also said that the 30 cartridges bought from Mizoram are usually used for hunting wild roosters.