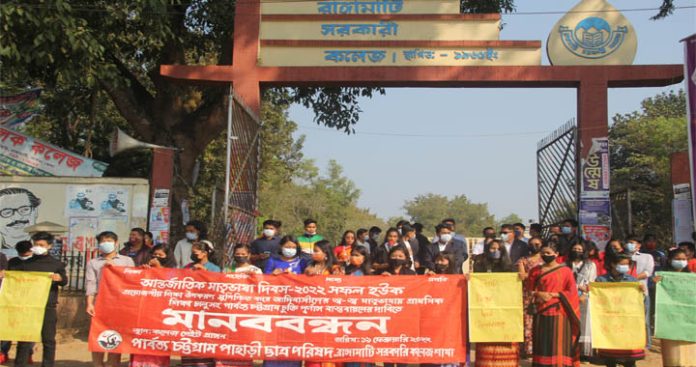 The human chain was held at Rangamati Government College Gate premises on Saturday (February 19) at 9:00 am.

In her speech, Shantidevi Tanchangya said, “We feel comfortable speaking in our mother tongue.” Language carries the identity of the existence of a nation. Ekushey’s spirit is to respect all languages. But when we wander around the city, the Bengalis make insulting of our language in various ways. He demanded that adequate teachers and necessary educational materials be provided for the introduction of primary education in the mother tongue of the indigenous peoples and speedy implementation of the CHT Agreement.

Speaking on the occasion, Sagar Tripura (Nantu) said the basic provisions of the CHT Agreement, signed on December 2, 1997, had not been properly implemented. After signing, CHT Accord passed more than two eras which is a very important time for a nation or a generation. Though the government has been in power for many years but has not taken any appropriate action till date for the same. He further said that due to non-implementation of the CHT Accord today, due to lack of proper conservation initiatives, the indigenous peoples who speak different languages in the hills have lost their language and culture. He demanded full implementation of the CHT Accord immediately.

Ziko Chakma, vice president of the Rangamati district branch of the PCP, said the Bayanno language movement was against the cultural aggression and discrimination of the Pakistani ruling class. Today, 70 years after the glorious struggle of Bayanno, the month of February, in fact, the adivasis and students of this country have to stand with banners in the hot sun and beg the state to give us a chance to get at least primary education in their mother tongue. Needless to say, it’s not as frustrating as it is embarrassing. As part of the diverse culture of this country, the state must take the necessary steps to preserve the language of the indigenous peoples of this country and create the field for the practice of that language.