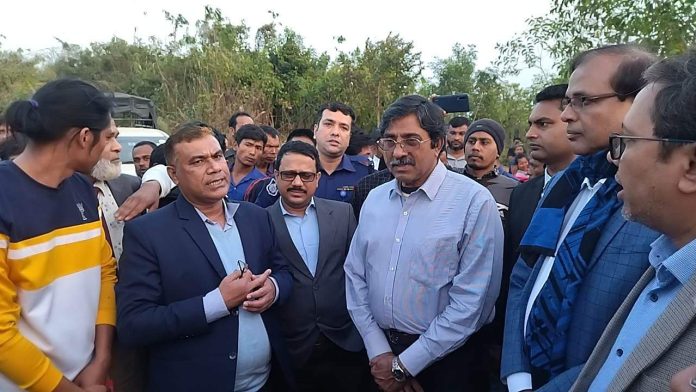 Hill Voice, 17 January 2023, Bandarban: The National Human Rights Commission (NHRC) is with the residents of Rengyen Mro Para who were victims of arson attacks. Kamal Uddin Ahmed, the chairman of the commission said to reporters after visiting the affected Mro Para.

He made this view while inspecting the incident of arson in Rengyen Mro Para of Dhenkichara Ambagan area of Soroi Union of Lama Upazila of Bandarban District at 5:00 PM on Tuesday (January 17). The chairman of the NHRC briefed the journalists after visiting the scene.

At this time, the chairman of the NHRC spoke to the affected people. During the inspection, the affected Mro villagers told the Commission the details of the attack, arson and looting of houses by the miscreants of Lama Rubber Industries and land grabbing by the rubber company late on January 1 late night. On behalf of the affected residents, Rangdhajan Tripura submitted a memorandum to the Commission demanding legal action against the Lama rubber industries and land grabbers.

He also said that the victims of Rengyen Mro Para are citizens of Bangladesh. No one can kill, evict and loot anyone unjustly. Villagers will stay in their place. No one can uproot them.

Dr. Kamal Uddin Ahmed said, last year on April 26, 2022, when Langkom Mro Para plantation was set on fire, the Commission came to know about this incident through the media. After learning about the matter, the commission started investigating the incident. Then the Commission is also very concerned about the arson incident on the homesteads in Rengyen Mro Para on 1st and 2nd January 2023.

He requested the residents to be patient. Those involved will be hunted down and wrongdoers will not be spared. The Commission believes that the perpetrators must be punished. The Commission will help the actual land owner to get the land.

This is the second round of investigation of NHRC into the incident. Earlier, on January 5, 2023, a 4-member delegation led by NHRC member Kongjari Chowdhury visited the scene. After the visit, Ashraful Alam, a member of the delegation and Director of the Complaints and Investigation Branch of the Commission, told reporters that the NHRC had given some instructions to the administration and the police due to the fear of deterioration of the law and order situation. He said that if those instructions were followed, the incidents of attacks, arson and vandalism would not have happened again.

On January 1, 2023, 150 to 170 people hired by the rubber company attacked Rengyen Mro Para with sticks and sharp weapons. On the other hand, 6 days after the incident, on January 7, Karbari (village head) Rengyen Mro filed the case as a plaintiff.

In the case, Chairman of Lama Rubber Industries Company Moazzem Hossain, Project Director Kamal Uddin, Managing Director Zahirul Islam and Manager Ariful Islam etc. as the instructors of the attack and residents of Keyazupara Bazar area Nuru, Delwar Hossain of Lambakhola Fajar Alipara, Duryodhan Tripura and Haziram Tripura of Keyaju Majherpara, Abdul Malek and Mohammad Mohsin of Keyajupara area were named as the six leaders of the attack and 150 to 170 unidentified persons have been accused.

But even after ten days of the case, no legal action has been taken by the police. As a result, the Mro people are still under fear, threat and eviction.