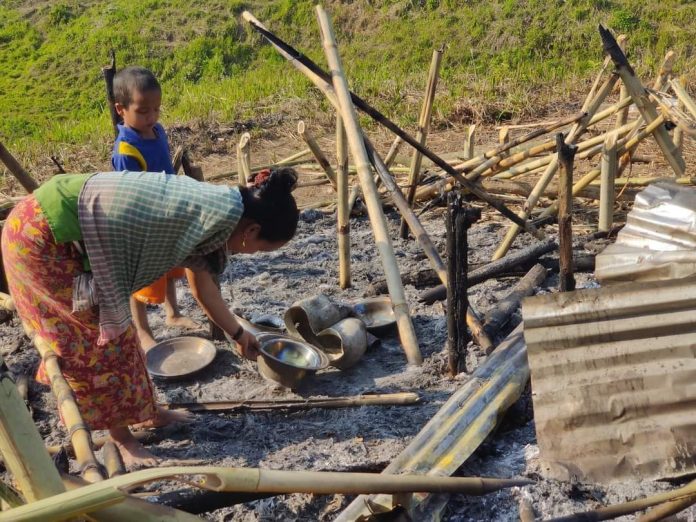 On the first day of the Christian New Year, at late night, Mro settlement of Rengyen Mro Para of Sarai Union of Lama Upazila of Bandarban was burnt down. Along with that, there was looting and extensive vandalism; houses were ransacked. The year 2023 started with a big bang for the residents of Lama’s Rengyen Mro Para.

Arson, looting, rioting in the homes of sleeping people in the middle of the night – no doubt these are premeditated. Village head Rengyen Karbari told various media that the attackers came to the village in several trucks at approximately 1:00 am. They set fire to houses; started vandalism and looting. The villagers somehow left their houses and took shelter in the forest to save their lives. Rengyen Karbari also said that terrorists from Lama Rubber Industries carried out the attack.

This is not the first time; goons from Lama Rubber Industries have carried out terrorist attacks in this area several times before. Rengyen Mro Para, Joychandra Tripura Para and Longkam Mro Para – these three Jumia villages are located side by side. On April 26 last year, Jum-farming lands, plantations and village forests of three villages were burnt. The fire caused extensive damage in an area of 400 acres. Wild animals, natural forests, crops of villagers, plantations are all burnt. There is widespread food shortage in the area along with biodiversity-environment disaster.

On July 13 last year, a group of terrorists attacked Rangdhajan Tripura, the organizer of Bhumi Raksha Andolan of Sarai Union. He was under treatment at Chittagong Medical College Hospital for many days with head injuries. After this, on September 6, poison was sprinkled in the hill spring, the only source of water in Rengyen Mro Para. In it, crabs, shrimps, small fish of various species started floating dead. Decomposition of dead animals increases water pollution. For more than seven days, the people of the village could not use the Jhiri water. On September 24, more than three hundred banana saplings of a Jum cultivator in Rengyen Mro Para were cut. All the attacks were carried out in broad daylight.

As we can see, the trend of the 2023 attack is a bit different. Earlier the targets of attack were Jum-farming land, village forests, water sources, banana plantations and movement organizers. But this time, the target of the midnight attack is the houses and homesteads. Not only attacks; arson, looting and vandalism were also carried out. Obviously, the prevalence of terrorism has increased. There is no doubt that the authorities of Lama Rubber Industries, who are accused of carrying out these acts of terror and arson, are very powerful. They continue to commit crimes in new ways by showing ferocious might and power.

The question is, who is rubber industries? What is the identity of the attackers? It is learnt that around 1992-93, the government leased Jum-farming land and small hills to several individuals for creating rubber plantations in Sarai area of Lama. Half a hundred people who got the leases came together to form ‘Lama Rubber Industries’. Among them are retired military-civilian bureaucrats; who at one time held various administrative responsibilities in the Bandarban hill district. Their relatives are also in the list. From the beginning of the lease given without regard to the traditional laws and regulations of land management in the hills, the leaseholders started expropriating more land of the leased area. On the other hand, the marginalized Jumma people continue to lose ownership. They were evicted from their own land and settlements. Recent attacks, arson, vandalisms are just a continuation of that.

The horror of the humanitarian disaster in the latest attack in Mro Para is reflected in the images that appeared in the media. In the severe winter of the hills, people are forced to stay in open sky. There are also images of burning fires overnight to ward off the cold. The condition of the children and the elderly persons in the affected families is surely worse. Even in the normal life cycle, it is difficult to prevent the cold of the needy people of the hills. And to guess the severity of winter in the open sky makes anyone really shiver.

Worryingly and painfully, even after three days of the incident, no help from the administration has reached Mro Para. Families who lost their livelihood in the arson are also going hungry. Two handfuls of rice are being collected somehow with the help of neighbours. But those neighbors themselves are needy and day laborers. More worryingly, those who perpetrated this gruesome rampage are yet to be prosecuted; arrest is the next thing. This is the main reason why Lama Rubber Industries is becoming reckless day by day.

The National Human Rights Commission issued some instructions to the Bandarban District Administration, Police and Ministry of Chittagong Hill Tracts Affairs after the incident of 26 April 2022. That directive to protect the three Jumia villagers of Lama’s Sarai Union has been repeatedly violated. Rather, the opposite picture is visible i.e. Lama Rubber Industries’ close relations with the local police and administration. The Lama’s Sarai Union is witnessing again and again the activities of law enforcement officials that encourage criminal gangs to carry out the repeated attack.

Under the law enforced as per the Chittagong Hill Tracts Peace Accord, the lease of Lama Rubber Industries is virtually illegal. But since the bulk of the Chittagong Hill Tracts Accord itself remains unimplemented even after 25 years; a voidable lease has not yet been cancelled. We hope that the government will soon cancel the illegal lease of Lama Rubber Company. And speedy legal action should be taken against the terrorists who attacked and arson in Rengyen Moro Para. Affected and victimized Jumia families are spending cold days and nights in the open sky with hunger – Be end this inhumane scenario urgently on priority basis.