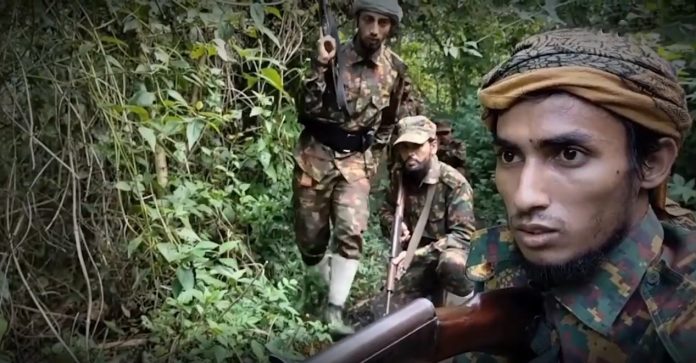 It is learnt that the video has been made with the aim of motivating the Islamist militants stationed in the plains and attracting the attention of international militant groups.

It is also reported that Islamic militants have planned to release the video when the militant organization would debut with a major attack.

RAB released the video image in a press conference at RAB’s media center at Karwan Bazar in Dhaka on Tuesday, January 24.

The video captures scenes of training with AK-22 rifles and shotguns while dressed in military uniforms. It showed 22-23 Islamic militants.

Two others identified as Saleh and Al-Amin are seen in the video. After his arrest, Saleh had traced the graves of two deceased militant members in Bandarban a few days ago.

Besides, Abul Bashar Mridha alias Alam, who was arrested on January 23 from the forest next to the Kutupalong Rohingya camp in Ukhiya, was also seen in the video.

RAB claimed that the video also identified a trainer of the Bandarban-based armed terrorist organization KNF, which is known as Bawm Party.

The video mainly covers tactics of how to fight, what are the tactics of self-defense, or how to take position themselves while falling in an ambush.

The video shows how the militant members will position themselves at an angular distance of 360 degrees while attacking the enemy’s camp.

The primary purpose of this video is to further motivate those who are in hills and undergoing training.

The video was also made for the purpose of what will be responsibilities of those who will be included in the military wing of the militant organization.

One of their objectives was to motivate various militant members staying in the plain by showing videos. Attracting the attention of international terrorist groups was also one of the main goals of this video.

The militants wanted to release the video at a time when the organization was making its debut with a major attack. For this purpose, the website was also being prepared.

It should be noted that an Islamic militant leader named Shamim Mahfuz started activities under the name of ‘Jamayat-e-Arakan’ from 2006 with the aim of establishing an Islamic state with Thanchi-Alikadam-Naikhyongchari-Lama of Bandarban and Maungdaw of Rakhine Province of Myanmar.

After that, in 2019, a new organization called Jamaatul Ansar Fil Hindal Sharqiya was formed by former members of the three banned militant organizations – Ansar Al Islam, JMB and Harkatul Jihad.

In order to train its members of this new militant organization established contact with the new armed group in the hills, KNF, known as Bawm Party. In exchange of money, KNF entered in agreement to train members of Jamaatul Ansar in their camps at Ruma and Rowangchari in Bandarban and Bilaichari in Rangamati. The agreement was valid till 2023.

At the end of 2021, the military training of these militants started in the KNF camp. There was training in weapons handling, bomb making, hit-&-ran attack and ambushes. Jamaatul Ansar has so far sent three batches of its militant members in three phases for military training to the KNF camps in the hills. Among them, 12 people were sent in the first batch, 31 people in the second batch, 12 people in the third batch, and a total of 55 people were sent.

It is worthy to be mentioned that on the basis of ‘divide and rule’ colonization policy, the army helped to form an organization called Kuki-Chin Development Organization (KNDO) with some opportunistic and submissive people of Bawm community, led by Nathan Bawm as president and Vanchunlian Bawm as general secretary of Ruma upazila of Bandarban district in 2008. Later in 2016, the organization was renamed Kuki-Chin National Front (KNF) and its armed wing Kuki-Chin National Army (KNA) was formed.

As soon as it emerged, this organization started a campaign against the CHT Accord and Parbatya Chattagram Jana Samhati Samiti (PCJSS), the signatory party of CHT Accord. However, though the KNF which was created by the army has become a boomerang for Bangladesh today by providing shelter and military training to Islamic militants in remote hills.