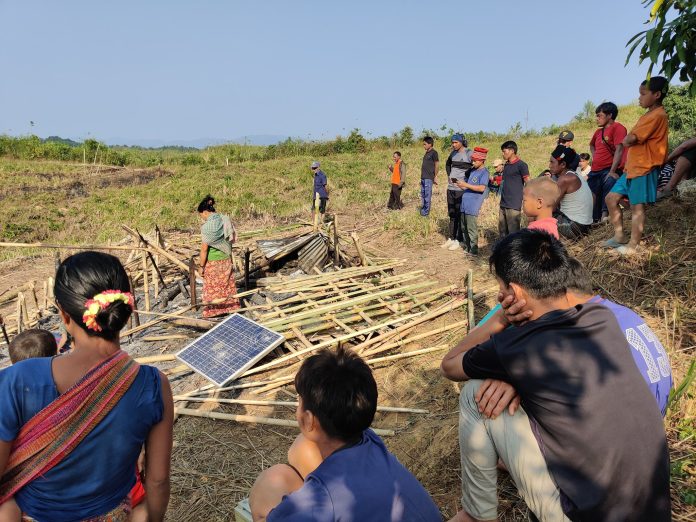 Hill Voice, 7 January 2023, Bandarban: A case has finally been registered after six days in the case of attack, arson, vandalism and looting at Rengen Mro Para of Sarai Union of Lama Upazila of Bandarban.

In the case, Chairman of Lama Rubber Industries Company Moazzem Hossain, Project Director Kamal Uddin, Managing Director Zahirul Islam and Manager Ariful Islam as the mastermind of the attack, and Md. Nuru of Keyazupara Bazar area, Delwar Hossain of Lambakhola Fazor Alipara, Duryodhan Tripura and Haziram Tripura of Keyazupa Magherpara, Abdul Malek and Mohammad Mohsin of Keyazupara area as leading persons in the arson attack have been accused and more 150 to 170 unknown persons have been mentioned.

According to the ejahar (statement) of the case, on January 1, 2023 late night, 150 to 170 people boarding in six small trucks with sticks came Rengyen Mro Para and attacked the villagers. The attackers brought sharp weapons and kerosene tanks in trucks along with them.
The ejahar also stated that to escape the attack, the villagers fled to the forest to protect themselves. The assailants opened the ductwork of the houses of Chamrum Mro, Rengwei Mro and Singchyong Mro and poured kerosene on the houses and set them on fire. Valuable documents (national identity card, birth certificate), Taka 18,200 and various household items were not found in three houses.

It has been mentioned in the case that five more houses were vandalized. Goods including solar panels, furniture, clothes, agricultural implements worth approximately eight lakh taka were looted from those five houses.

It is to be noted that on the evening (December 31, 2022) before the arson and attack, SI Shamim of Lama police station came and warned the residents of Rengyen Mro Para and threatened that no houses can be built in this area and all the houses will be demolished.

After these threats and instructions from the police, the people of Lama Rubber Company attacked at night. So, the indigenous people were afraid to go to the police even in such a state of helplessness. Now it remains to be seen whether the police take effective action against the attackers after filing the case.

In fact, since April 26, 2022, for almost a year, the Lama Rubber Company, with the direct support of the army and the police administration, has been carrying out repeated attacks and conspiratorial activities including filing of fabricated cases on the indigenous Mro and Tripura villagers of Lama.

The National Human Rights Commission and investigation committee of Bandarban Hill District Council have recommended the arrest of those involved in the attack and exemplary punishment, taking measures for security of life including land rights to Mro and Tripura villagers and cancellation of the lease of Lama Rubber Company, however, no action has been taken by the government so far, which resulted repeated attack of Lama Rubber Company continues on Mro and Tripura villagers in Sarai of Lama.