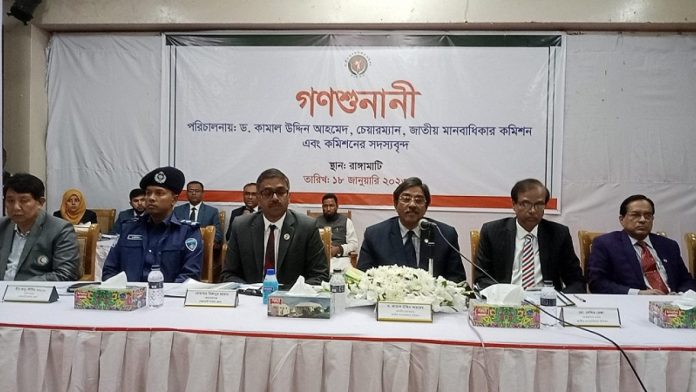 Hill Voice, 19 January 2023, Special Correspondent: The Chairman of the National Human Rights Commission (NHRC), Dr. Kamal Uddin Ahmed, commented that there have been human rights violations alarmingly in Chittagong Hill Tracts (CHT). But he is of the opinion that there is no situation to be frustrated. For this he urged everyone to deal with patience and tolerance.

Dr. Kamal Uddin Ahmed expressed these views in the speech of the chief guest at the public hearing organized by the NHRC at the Rangamati Cultural Institute Auditorium on Wednesday (January 18) about the ongoing human rights situation in the CHT. The NHRC organizes public hearings to promote the culture of human rights across the country.

Dr. Kamal Uddin Ahmed said, by talking to different communities, we understand that human rights are being violated in CHT. We want to develop a prosperous and harmonious CHT. Let the people of all communities live together in non-communal ideology. For this purpose, we will send the recommendations of everyone’s opinion to the government.

Santoshita Chakma, general secretary of the CHT Jumma Refugee Welfare Association, said in the public hearing that due to the lack of proper implementation of the CHT Accord of 1997, a complex situation is being created along with alarming human rights violations in the hills. He also alleged that India-returnee Jumma refugees and internally displaced Jumma families have not been properly rehabilitated. He also said that more than 25 incidents of communal attacks and arson have taken place after the Accord. These attacks and arson were carried out on the Jumma people in the presence of law and order forces. Hundreds of Jumma families have been affected in these incidents. Jumma people are losing land in the name of tourism. The government needs to take more initiatives to bring back the Bawm refugees who fled to the Indian state of Mizoram. Proper, speedy and full implementation of the CHT Accord is necessary to establish peace and human rights in the hills.

Many who participated in the public hearing expressed their anger that in the name of the public hearing, it was a gathering of anti-Accord and ultra-communal people. Many have complained that mainly those people who are involved in one after another communal attacks and arson and land grabbing on Jumma people, anti-Accord and opportunistic people, leaders and workers of the ruling party have been called to this public hearing.

Santoshita Chakma, general secretary of CHT Jumma Refugee Welfare Association, wrote on his Facebook wall reacting about the public hearing, that the public hearing was dominated by those communal people who were involved in human rights violations including killing of more than forty thousand indigenous Jumma people in more than a dozen massacres between 1979 and 1993, and killing, looting, arson and land grabbing after the 1997 CHT Accord.

After receiving information from the administration, many settlers from different upazilas (sub-districts) attended the public hearing in a well-planned manner. The indigenous Jumma people, who have been victims of human rights violations in the CHT, were completely helpless in the public hearing. He pointed out that representatives of indigenous Jumma people could not speak properly for fear of security of life and property and retaliation of the administration.

A Jumma rights activist participating in the public hearing who did not wish to be named said that in the public hearing, not only Kazi Mojibur Rahman, the chairman of the ultra-communal and ultra-nationalist organization ‘Parbatya Chattagram Nagorik Parishad’, but also the leaders and workers of the ruling Awami League surprisingly spoke against the CHT Accord, the charter of rights of Jumma-Bengali permanent residents of CHT. They gave a one-sided and concocted statement before the members of the NHRC that the special rights of indigenous Jumma people recognized in the CHT Accord are unconstitutional. However, the members of the NHRC were surprisingly silent about the provision for the marginalized indigenous people like the Jumma people of CHT in the Constitution which states that “Nothing in this article shall prevent the State from making special provision in favour of women or children or for the advancement of any backward section of citizens. Not only that, he mentioned that the public hearing has been made a kind of joke by referring to the individuals and organizations engaged in the movement for implementation of the CHT Accord as well as rights to self-determination of the Jumma peoples as extortionists and armed miscreants.

Another Jumma women’s rights activist who participated in the public hearing said that CHT Accord is one of the tools to protect and promote human rights in CHT. However, no one mentioned single word for implementation of that Accord. Instead of a political and peaceful solution to the CHT problem through the implementation of the CHT Accord, the current government, alike of the previous dictators, has taken the initiative to solve the problem by repressing through massive militarization. As a result, like the pre-Accord regime, arbitrary arrests by putting arm, extrajudicial killings in the name of crossfire, imprisonment on false charges, beatings in camps and detention for days, house searches and ransacking valuables, patronizing settlers in communal attacks and arson and occupation of land of Jumma people, eviction of Jumma people from their ancestral land, violence against Jumma women, etc., have become a daily routine for the hill dwellers today.

Chanchana Chakma, former president of Hill Women’s Federation, said that human rights are inherent rights of every citizen. It is the responsibility of the state to protect, promote and respect human rights. However, state machineries and the communal groups supported by the state forces continue to violate the human rights of the Jumma people. But those who are continuing the movement for fundamental freedom and human rights have been accused of human rights violations in the public hearing organized by the NHRC. What a surprise!