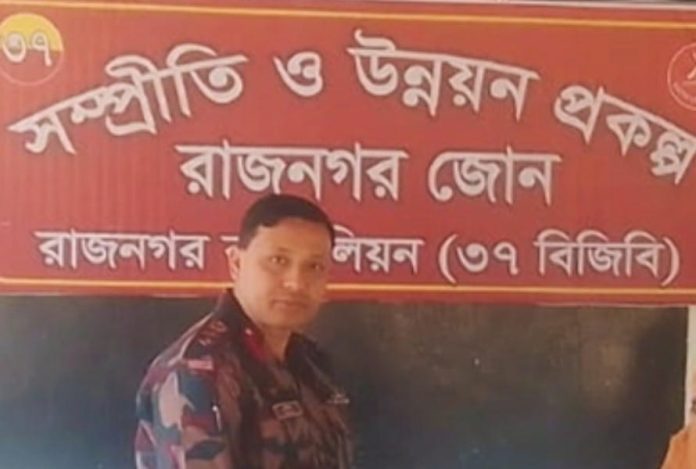 Hill Voice, 18 January 2023, Rangamati: It has been alleged that a zone commander of Border Guard Bangladesh (BGB) made intimidations and harassing questions to a groom’s father of a local Chakma villager during the wedding ceremony in Gulshakhali Union of Longadu Upazila under Rangamati District.

According to local sources, Tuesday (17 January) was the wedding day of the son of Kalachan Chakma, a resident of Shantinagar village of Gulsakhali Union in Longadu. While the wedding ceremony was going on around 3:30 pm, zone commander of Rajanagar Battalion of 37 BGB Lt. Col. Shah Md. Shakeel Alam (PSC) arrived at Shantinagar Non-government Primary School ground adjacent to the wedding venue with a team of 35/40 BGB personnel in three pick-ups and 7/8 motorbikes.

Although Kalachan Chakma replied that he did not know about this matter, Lt. Col. Shah Md. Shakeel Alam also asked various abusing questions like ‘Why didn’t you inform us?’, ‘How many people have been invited to the wedding?’

At this time, anxiety and panic arise among the invitees and guests present at the wedding ceremony. Many termed it an abuse of power and inhumane treatment by the BGB commander and widespread interference in the daily life of the Jumma people by the state forces.