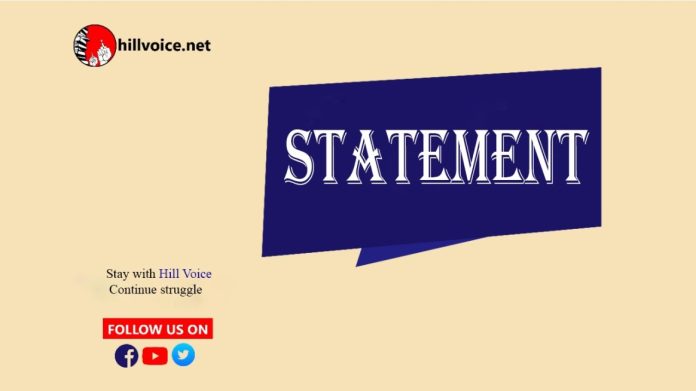 Hill Voice, 30 July 2022, Special Reporter: In a joint statement by 50 prominent citizens, the Information Ministry’s circular dated 19 July 2022 being urged by the intelligence agencies not to use the word Indigenous was termed as unconstitutional and contemptuous of the High Court. The eminent citizens called for the immediate withdrawal of the said circulation. A statement signed by ALRD Executive Director Shamsul Huda on behalf of 50 prominent citizens stated that-

“We have learned with deep anger and surprise that a circular has been sent from the Ministry of Information to the heads of all television channels in the country saying that ‘University teachers, experts and newspaper editors and other members of the civil society who participate in the talk show organized on the occasion of the International Day of the World’s Indigenous Peoples on August 9, 2022 have been requested to spread awareness about the constitutional obligation not to use the term “Adivasi” in the case of Bangladesh. The word indigenous was used explicitly several times in section 28(a) of the government’s 2008 election manifesto, the information ministry of which  government issued this circular.

This circular is actually based on and circulated as a copy of an intelligence agency circular. We do not understand when and how the power to decide whether a word is constitutional or unconstitutional passed to the circular makers of an Intelligence Directorate or Ministry of Information. It is with deep anger and concern that we are compelled to say that this amounts to gross malpractice, which is neither desirable nor legal.

Because the constitution of our country clearly mentions that if there is any controversy or disagreement about any article or subject of the constitution, only the highest court of the country, Bangladesh Supreme Court, can explain it, not any other organization, group or individual. And in a judgment of the Supreme Court of Bangladesh, instructions have been given in unequivocal terms that there is no legal impediment to the use of the word indigenous.

Moreover, it is also true today that the government led by Father of the Nation Bangabandhu Sheikh Mujibur Rahman signed the ILO Convention 107 in 1972, not only used the term indigenous, but also recognized all their rights. Apart from this, the Honorable Prime Minister Sheikh Hasina of the present government, who has been in power for several terms, in her messages on the occasion of Indigenous Day in 2009, strongly emphasized on the establishment of all the rights and dignity of the indigenous people in their own identity.

Above all, the freedom of speech and freedom of the press, which are given in clauses 2(a) and 2(b) of Article 39 of the Constitution, have been completely denied in this circular. The state has no say in what words one chooses, as long as the use of those words does not spread spite or hatred towards someone else. Therefore, we express strong anger and protest against this circular and instruction. At the same time, we appeal to all concerned parties to refrain from trying to mislead the indigenous peoples and other marginalized communities or to degrade the civil society, journalists and intellectuals with independent opinion by issuing such bureaucratic arrogant circulars. And we strongly demand the immediate withdrawal of the circular that is outside the jurisdiction of the Ministry of Information.”

Those who signed the statement are: