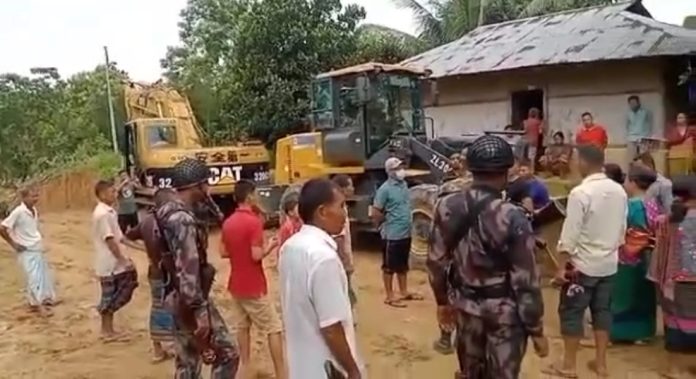 Hill Voice, 1 August 2022, Rangamati: It has been reported that army and BGB authorities have suspended their border road construction work in Baghaichari Union area of Baghaichari upazila under Rangamati district in the face of resistance from local indigenous Jumma people.

Today Monday (August 1, 2022) at approximately 8:30 am, while the 20 Engineering Construction Battalion of the army and members of the Border Guard Bangladesh (BGB) started construction work of the border road, local Jumma men and women gathered at the spot to demand protection of their houses, land and plantations. They once again stood in front of the bulldozers to resist construction of the road demanding that the army and BGB members stop their work

Meanwhile, the zone commander of BGB asked the local Jumma people to submit the list of the affected families and the damage to him and said that he will talk to the higher authorities and see what can be done.

On the other hand, it is said that a delegation of the affected local residents will raise the matter with the relevant higher authorities.

It is to be noted that yesterday 31 July 2022 at 10:00 am the Zone Commander of 27 BGB Marishya Zone Lt. Col. Md. Shariful Abed (SGP) inaugurated the construction work of this border road. Immediately after this, in his presence, the members of the 20th Engineering Construction Battalion of the army forcibly destroyed the shops and valuable trees of the indigenous Jumma villagers with bulldozers and tractors in the road area of Aryapur Bana Bihar and started the construction of the border road.

At this time, the local Jumma villagers led by Chairman of Baghaichari Union Parishad Olive Chakma protested against this road construction work to the Zone Commander Lt. Col. Md. Abed (PSC) stating huge damage of the Jumma people and demanding to stop the work. But the BGB and army personnel started road construction without heeding the protests and demands of the local people.

According to the information of the villagers, the army personnel destroyed one shop of a Jumma villager and about 1000 agar and teak trees in the area adjacent to the road under construction with bulldozers and tractors by yesterday morning.

According to local sources, a 30 feet wide road will be constructed from Aryapur shop road to Kajoichari Mukh, a distance of approximately 4 km and at least 50 families of Jumma villagers will be affected. This road will be connected to the road of Kajoichari BGB camp from Tangum Mukh Bridge in Sarbowatli Union.

At present there is a 10 feet wide brick paving road at the site and vehicles are plying on the road. The affected local villagers said that there is no need to cause damage by widening the road by 30 feet.

It is to be noted that this road is reportedly being constructed under the 317 kilometer long Border Road (Rangamati, Khagrachari and Bandarban Hill Districts) construction project.