Hill Voice, 11 September 2020, Rangamati: A Jumma housewife (22) was allegedly molested at her home by two settler youths in Geitya Mahajan Para in Barkal upazila of Rangamati district. The incident took place on 9 September 2020 Wednesday at 10.30 am.

According to local sources, two settlers named Mohammad Rabiul (25) and Mohammad Chunnu (30) of Keyaghat Bazar area of ​​Ward No. 3 of Bhushanchhara Union of Barkal upazila went to the house of Bagara Chakma of Geitya Mahajan Para village in the upazila.

On 11 September 2020 Friday at 10:00 am, an arbitration was held at the Awami League office in coordination of the acting president of Awami League’s Barkal Thana branch Md. Nazrul Islam. In the arbitration, the settlers accused were reportedly fined Tk. 10,000 for the incident. However, sources said that Jummas did not accept the money. 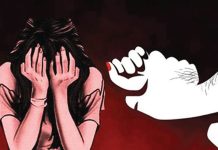