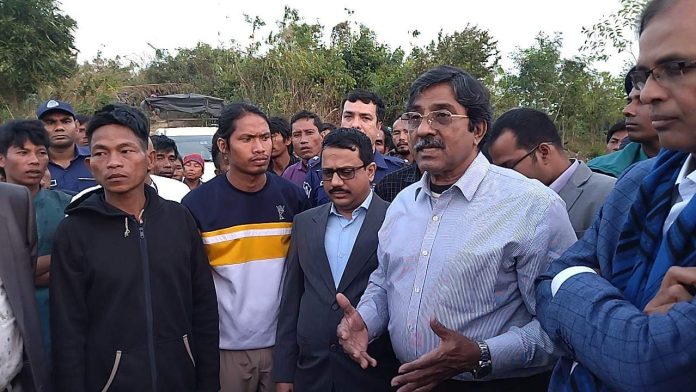 Hill Voice, January 17, 2023, Bandarban: On behalf of the villagers, Lama Sarai Bhumi Raksha Sangram Committee has demanded to bring the Lama Rubber Industries under trial, and to protect 400 acres of land which was last resort of life and survival of the villagers, and to cancel illegally taken lease by the company.

Today on Tuesday (January 5), the claim was made in a memorandum submitted by Rongdhajan Tripura, convenor of the Lama Sarai Bhumi Raksha Sangram Committee on behalf of the villagers. The full text of the memorandum is given below:

Memorandum to the Chairman of Bangladesh National Human Rights Commission Dr. Kamal Uddin Ahmed by the Lama Sarai Bhumi Raksha Sangram Committee on behalf of the villagers in protest of land grabbing, arson, looting and injustice by the Lama Rubber Industries.

On behalf of villagers of the Lama Murung Para, Joychandra Tripura Para and Rengyan Murung Para under the No.1 Sarai Union of Lama upazila of Bandarban district, we extend our sincere thanks and gratitude to you and other members of the Commission for coming to see our situation as part of the visit to the Chittagong Hill Tracts, after taking charge of the National Human Rights Commission. Earlier, on January 5, a delegation led by one of the members of the commission, Kangjori Chowdhury, arrived here to visit the scene. We are grateful for that too.

We have been living in this area for a long time in three villages of Mro and Tripura communities. We are mainly dependent on traditional Jum cultivation for our livelihood. But a class of influential people have become active to seize our collectively owned Jum farming land, and they have been trying to take away these life-saving lands for a long time and are desperately trying to evacuate us.

As part of this effort, the goon of the Lama Ruber Industries Limited attacked the Rengyen Mro Karbari Para last January 2 at 1:00am. They came to the village with 4 trucks and entered the village with the ax, the iron rod, sticks, etc. At this time, we were forced to take shelter in the surrounding jungle to save our lives. In this incident, the attackers set fire to five houses in the village, vandalized five and launched a lot of looting. They took all that they have got including cows, goats, poultry, money, mobile phones, national ID cards and household equipment. On behalf of the company, Md. Nuru, Delwar Hossain and Mohammad Mohsin led the brutal medieval attack.

Despite the fear of insecurity of life, we were able to file a case with Lama Police Station on January 5 last one week after the incident. But the police could not arrest the accused for mysterious reasons. At present we are forced to live in fear and panic, because the accused are not arrested and after such attacks, they can attack us again because they have not been given any punishment.

As mentioned earlier, the Lama Rubber Industries is trying to occupy our land and evacuate us from the area. To this end, I am presenting a brief description of the crimes committed by the Lama Rubber Company in the last few months with an intention to evict us by occupying the traditional Jum land.

2) On April 23, 2122, the people of the company set on fire the plantations that cut off. In this, a large number of natural forests along the Jum-farming land were destroyed by the fire, and wild animals and bush fish were killed.

3) On July 13, 2022, the convener of the Lama Sarai Bhumi Raksha Sangram Committee, Rongdhajan Tripura, was attacked at the Daluchari Mouza Headman office with an intention to kill him. As he was seriously injured, then he was forced to take treatment at Chittagong Medical Hospital for 5 days due to critical condition.

6) On September 1, 2022, approximately 1 matric tone of sweet pumpkin were robbed from our field.

7) On September 4, 2022, another false case was filed against the Land Protection Committee and some of the village again.

8) On September 6, 2022 company people poisoned the only source of drinking water to kill us. As a result, on the one hand, our drinking water is scarce, on the other hand, other aquatic animals including shrimps, crabs and shrimps die.

9) On September 13. 2022 another false case was filed by Lama Rubber Company against 8 people of us.

10) On September 17, 2022, the company blocked the road by forming a lathial force with Rohingyas to prevent the arrival of a delegation of 4/5 people including Prof. Sadeka Halim, Dean of the Faculty of Social Sciences of Dhaka University from Dhaka to visit the spot.

11) On September 24, 2022, the people of the company cut and destroyed our banana plantation.

12) On October 23, 2022, the company’s people cut down the mango, banana and other trees that the villagers had created themselves in Rengyen Karbari Para.

Lama Rubber Industries is committing crimes like this again and again, but there is no punishment for it. Our question, are the people of the company above the law? Are they stronger than the state and the government that the law-courts of the country cannot even touch their hair? We are also citizens of this country. But till date we have not got any justice. We are being faced injustice one after another, our land is being taken away. We are now a minority in our own area. But not too long ago, we were once the majority in Lama. In the last few years, hundreds of acres of our Jum land have been taken away. Still the greedy of land grabbers is not satisfied. They are also desperate to take away our last resort of 400 acres.

Our condition is now very bad for losing the land, it has become difficult to even have a life. The huge land that was once ours, now in the possession of others — the sight brings tears to the eyes. Our entire existence is under threat today. It is not possible for us to survive without the help and sympathy of the kind-hearted people of the country. Therefore, in this situation, as the Chairman of the National Human Rights Commission, our humble request to you-

1) Do whatever is within the power of the commission to protect these 400 acres of land which is our last resort for livelihood and survival. Take necessary action to bring Lama Rubber Industries to justice. Recommend cancellation of lease illegally taken by company to government.

2) Help us to achieve just demand and compensation from government and companies.

3) Pressurize the Government and Lama Rubber Industries to withdraw the all the false cases of harassment filed against us.

4) Help us to have the right to live a normal life and ensure the safety of our family and property.

5) Recommend to the government to take measures to prevent the recurrence of the current problem in the near future.