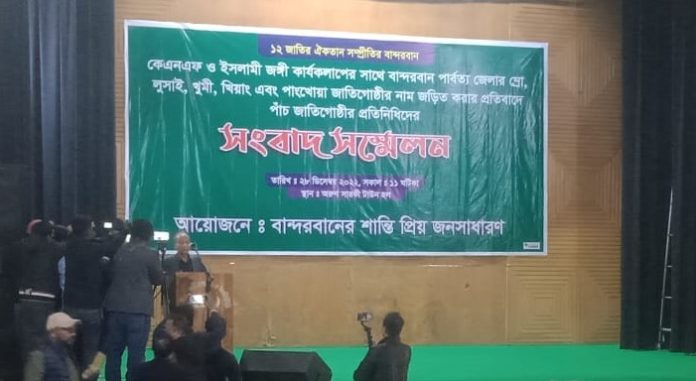 Hill Voice, 28 December 2022, Bandarban: The people of Mro, Lusai, Khumi and Khiyang and Pangkho communities never support the armed activities of the Kuki-Chin National Front (KNF) and the policy of providing shelter to Islamic militant group named “Jamatul Ansar Fil Hindal Sharqiya.” The representatives of the 5 communities strongly protested and condemned the propaganda of KNF by associating the names of 5 communities with KNF activities.

Today Wednesday (December 28) at 11:00 a.m. under the banner of ‘Peaceful People of Bandarban’, representatives of Mro, Lusai, Khumi, Khiyang and Pangkho communities held a press conference at Arun Saraki Town Hall in Bandarban town to raise this protest.

It was stated in the press briefing that recently an armed group named the Kuki-Chin National Front (KNF) has emerged. The KNF is claiming that this armed organization has been formed by the six indigenous ethnic groups of Chittagong Hill Tracts, namely Bawm, Pangkho, Lusai, Mro, Khumi and Khiyang and has embarked on a movement with the people of these six ethnic groups for establishing their rights. 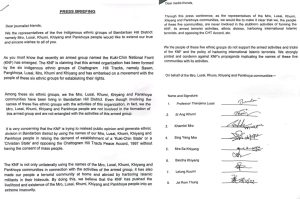 The representatives of the 5 communities also said, “Among these six ethnic groups, we the Mro, Lusai, Khumi, Khiyang and Pangkho cummunities have been living in Bandarban hill district. Even though involving the names of these five nations with the activities of this organization, in fact, we the Mro, Lusai, Khumi, Khiyang and Pngkho peoples are not involved in the formation of this armed group and are not entangled in the activities of this armed group.”

It is very concerning that the KNF is trying to mislead public opinion and generate ethnic division in Bandarban district by using the names of our Mro, Lusai, Khumi, Khiyang and Panglho peoples in raising the demand of establishment of a ‘Kuki-Chin state’ or a ‘Christian state’ and in opposing the Chittagong Hill Tracts Accord of 1997 without having our consent.”

At the end of the press briefing, the representatives said, “through this press conference, as the representatives of the Mro, Lusai, Khumi, Khiyang and Pnglho communities, we would like to make it clear that we, the people of these four communities, are never involved in the stubborn activities of forming the KNF, its armed terrorist activities, ethnic division, harboring international Islamic terrorists, and opposing the CHT Accord, etc.”

It is to be noted that on the basis of the ‘divide and rule’ colonial policy, with the help of the army and Islamic militants, in 2008, the Kuki-Chin Development Organization (KNDO) was formed by some opportunistic and subservient persons of the Bawm community with Nathan Bawm as the president and Vanchunglian Bawm as the general secretary.

According to an investigative report by the Hill Voice, it has been reported that Islamic militant organizations are providing financial assistance of Tk. 30 lakhs per month to the KNF.

On 6 October 2022, when information about the training and sheltering of militants called Jamaatul Ansar Fil Hindal Sharqiya by the KNF was revealed through RAB’s press briefing, combing operation was started against Islamic militants and KNF by army, RAB and SSF.

Due to this, the common people of the Bawm community suffered greatly. As a result of the insecurity, more than three hundred Bawm villagers took shelter as refugees in the Chamdur Project area of Lawngtlai district in Indian state of Mizoram.