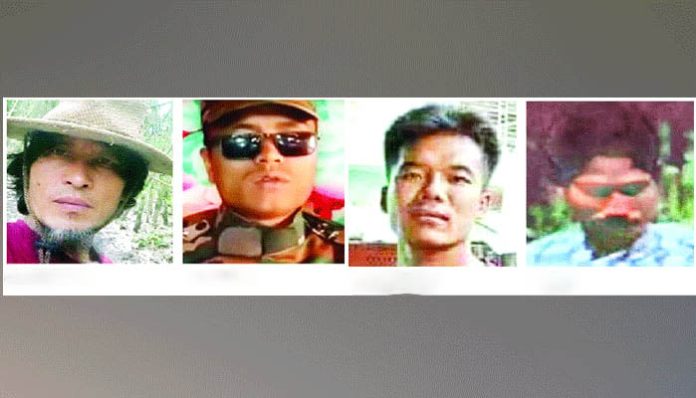 (1) Lalmunthial Bawm, who identified himself as Col. Solomon and in-charge of the Information and Intelligence Branch of the KNF;

(2) Vanchunglian Bawm, who is the general secretary of the KNF and identified himself as head of the military wing (KNA) of the KNF;

(3) Lalmun Sang Bawm, who uses the pseudonym ‘Padan’ and poses as a KNA commander; and

(4) Didar alias Champai, but not much information is available about him.

A recent investigation revealed that the KNF known as the Bawm Party has been providing shelter and military training to Islamic militants engaged in militant activities with the secret mission of establishing an ‘independent Islamic State’ with Naikhyongchari, Thanchi and Alikdam in Bandarban and a part of Maungdaw region in Myanmar’s Rakhine state adjacent to Cox’s Bazar in exchange for money. That militant organization has been active in this secret mission as Jamaya-e-Arakan since 2006 and later changing its name as Jamaatul Ansar Fil Hindal Sharqiya since 2018.

It is learnt that Bawm Party chief Nathan Bawm and Jamayat-e-Arakan or Jamaat Ansar Fil Hindal Sharqiya chief Shamim Mahfuz were students and also friends of Dhaka University at the same time. Although the goals and objectives of their two organizations were conflicting, but as they have old friendship, the two organizations led by them entered into an understanding to cooperate with each other in 2020

As part of that agreement, KNF led by Nathan Bawm has been providing shelter and military training to members of the Islamist militant group. In return, Jamatul Ansar Phil Hindal Sharqiya led by Shamim Mahfuz has been providing monthly and lump-sum financial assistance to KNF.

It is to be noted that on the basis of ‘divide and rule’ colonization policy, the army helped to form an organization called Kuki-Chin Development Organization (KNDO) with some opportunistic and submissive people of Bawm community, led by Nathan Bawm as president and Vanchunlian Bawm as general secretary of Ruma upazila of Bandarban district in 2008. Later in 2016, the organization was renamed Kuki-Chin National Front (KNF) and its armed group Kuki-Chin National Army (KNA) was formed.